"I am glad to have you standing nigh with your stout legs and your hard axe." Legolas, The Two Towers
Loren Fetterman 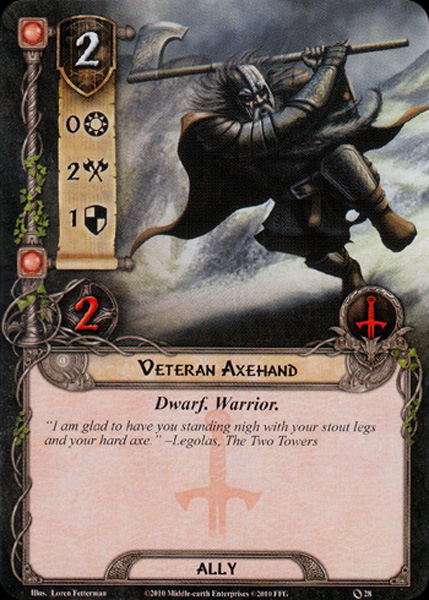 Veteran Axehand is a great vanilla ally. He's cheap, and he gets you that important extra attack. If you chump him, you're not losing too much, but there are much better candidates. However he is a Dwarf, so he benefits from Dain's boost and becomes an amazing two for three ally that can take a bunch of cool warrior attachments like Raiment of War and Vigilant Guard.

Wandalf the Gizzard 1997
Quite true. However, I find that Booming Ents are a better way to go if you have them because they cost the same but have better stats. They're also amazing for quests with archery because if you damage them or other Ent characters you get an attack boost. Nice post. — The White Wizard 516 6/7/17
Booming Ents are amazing, but that 1 round delay to get them into action can be really limiting especially in early game. Veteran Axe Hand is quick and ready, to offset this. So it's a tradeoff. — Mad Morderan 116 3/10/20
1

Very solid cheap ally, which looks just from the picture, that he can handle little bit more then the other cheap chumps from the core set. i didn't get yet to built Dwarf deck, but when I will, these guy is going to be there for sure. interesting artwork also. Verdict: 4/5.