Response: After a character is destroyed, add 1 resource to attached hero's pool.

'Slow should you be to wind that horn again, Boromir,' said Elrond, 'until you stand once more on the borders of your land, and dire need is on you.'
The Fellowship of the Ring
Mark Winters 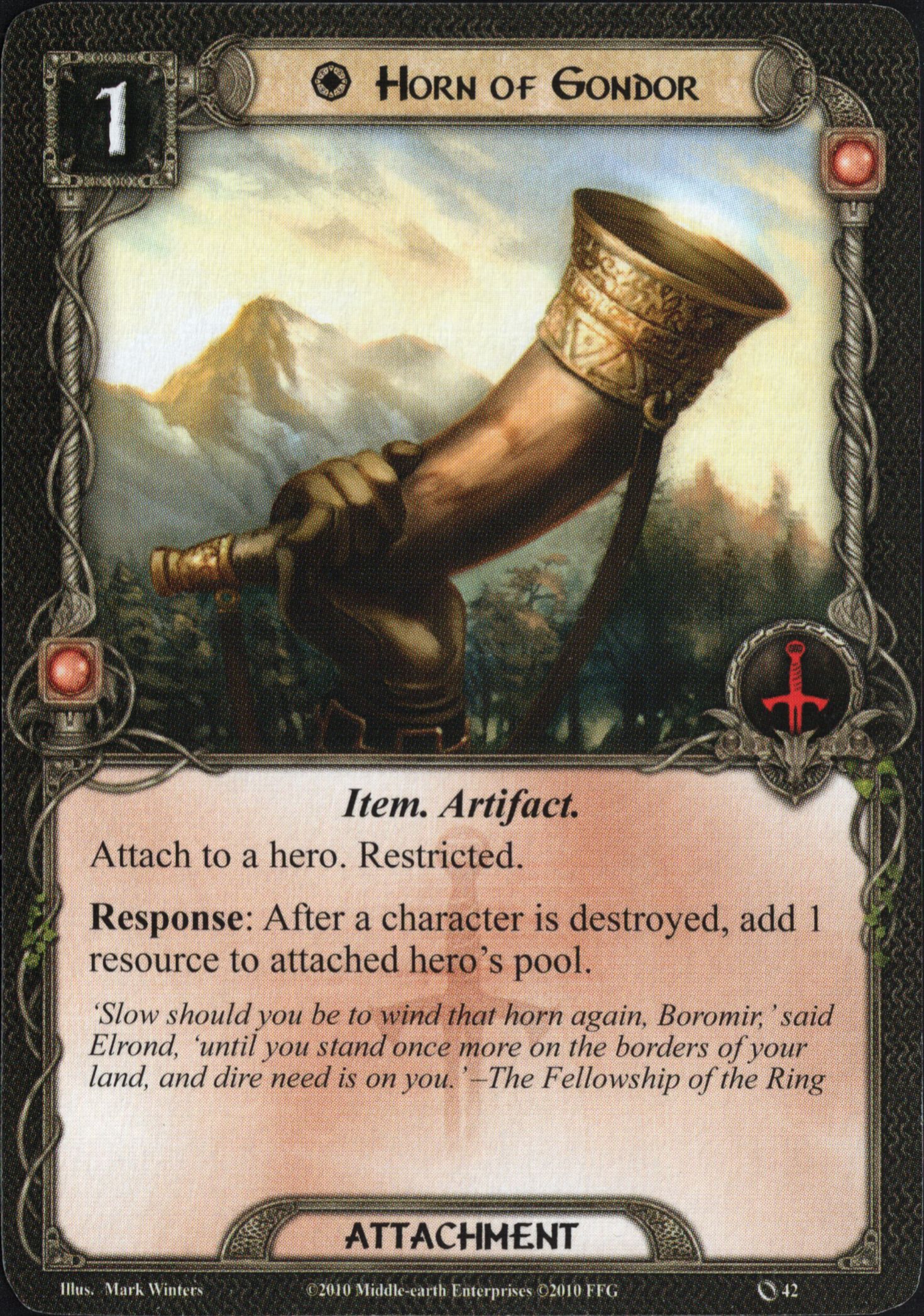 Ah, Horn of Gondor. You've seen better days. This was an amazing resource accelerator second only to Steward of Gondor. And then Seastan broke the game again with another infinite loop (which is all well and good). The designers could have simply given Emery or Rallying Cry an errata and the Horn would still be great. Oh, well. Rest in peace Horn of Gondor. You have joined your bearer.

The new Gondorian "Taps" bugle. The HOG was overpowered, way too powerful with silvans on the table. But this version basically takes it out of the card pool unless you love chump blocking which makes it good for swarm decks. Just really unsatisfying to use for a very memorable artifact from the story. Could have had valour synergy, "exhaust horn to raise your threat by 1 and add 1 resource" or "exhaust HOG raise your threat by 1 and ready up to 3 allies" something powerful enough to justify its "unique" and "restricted" trait in most decks. Plenty of tactic decks might actually use something like that.

Yes, the errata'd version of this card is much maligned, but it has its place, imo. Consider its use in Lore/Tactics decks as resource acceleration, especially in a sphere that has barely any (Lore) outside of Master of Lore (which also got nerfed!). However, I've used it on with Song of Battle to give that much needed resource boost to Lore and it has saved me a time or two. Sure it's nowhere near as good, but it's still handy for that niche.

Horn of Gondor is very nice resource accelerator, which is getting even better for me with eagle deck and Prince Imrahil. Basically in every deck using leaving/coming mechanics, it works very well. i own only one core set, but in this case I'm glad its unique. Some things should stay limited. Artwork is very nice. Verdict: 5/5.