While Dáin Ironfoot is ready, Dwarf characters get +1 and +1 .

"You have not heard of Dáin and the dwarves of the Iron Hills?" Bilbo Baggins, The Hobbit
Tiziano Baracchi 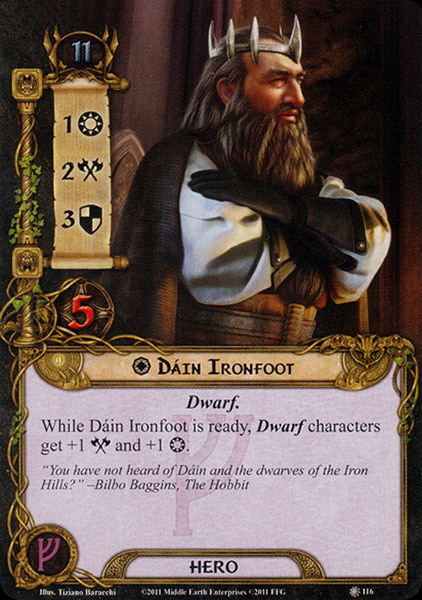 The KING of the Dwarves. If you are making a powerhouse questing and attacking dwarf deck Dain is the way to go. His global presence not only helps YOUR dwarf characters but OTHER players dwarf characters as well. Also, don't forget that good ole Dain has to be ready ( Proudly standing with weird arms in artwork) so no questing for him, so his fellow shrimps can acquire his QUESTING buff of aaaahhhh thousand truths. To utilize his defense, Use Cram to ready him back up so your SWARM of dwarves can get the 1 attack buff to return the favor to the scum of Middle Earth.

HellboyHots 11
Or Unexpected Courage, too, since it's not a one-off. — delphinidae 80 4/20/16
I would like to see Dain receive an Errata to include the Noble trait. Why would the King Under the Mountain not have the Noble trait? If he did, you could use Heir of Mardil attachment to ready him after a timely use of the Steward of Gondor. — thaiboy79 1 5/19/16
Glad I'm not the only one who had to squint at his arms for a bit. — NoSoup4you 605 9/27/16