While Elladan is in play, Elrohir gets +2 .

Response: After Elrohir is declared as a defender, pay 1 resource from his resource pool to ready him.

"We will not turn back."
The Return of the King
Magali Villeneuve 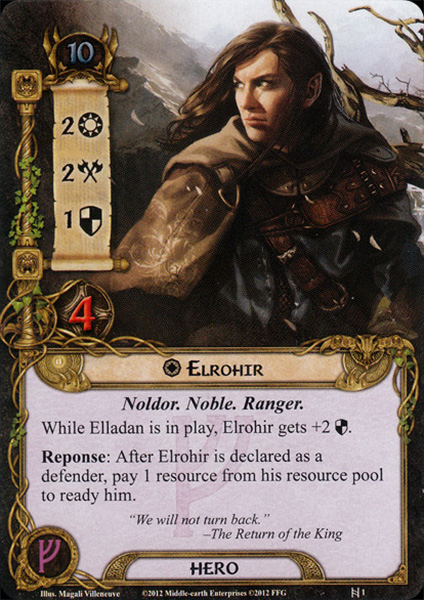 First off let me preface by saying that I think Elrohir and Elladan are highly underrated heroes. Yes they require their brother to be in play to be playable but so long as that is the case they can be absolutely fantastic heroes. More so than any other combat heroes except perhaps Boromir they highly reward you for piling up attachments on them thanks to their inbuilt readying. Thanks to this inbuilt ability Elladan or Elrohir alone can defend against or attack and potentially destroy several enemies in one round. Because they have fantastic starting combat stats (3 attack or defense) getting extra actions out of them can almost be compared to having an additional hero. For a single leadership or tactics resource it is sort of like having an additional 3 attack or defense strength hero for the round (obviously not exactly the same as you cannot attack enemies more than once with Elladan etc). So long as you have them buffed with attachments it can be like having an additional 5 attack or defense strength hero! Even without a single attachment they can still do what no other hero can without readying attachments, defend or attack several times in one round.

I think that some of the obvious restrictions when using these two heroes are what lead people to underestimate the pair. Due to their abilities being quite resource intensive you obviously need to use a deck with lots of low cost cards when running the brothers together. You need to find a perfect balance between using their resources to play cards and using their resources to activate their abilities. This can be difficult but also adds an extra layer of planning and strategy to a deck which isn't necessarily a bad thing and might be ideal for some players. It isn't just a matter of playing cards as soon as you can or as soon as possible you really need to weigh up the use of your resources and whether you will need or want additional combat actions from the twins.

Steward of Gondor/The Day's Rising are both no-brainers on Elrohir so that you always have plenty of resources to get additional actions. The Day's Rising does require Sentinel but there is so much incentive to get Sentinel on Elrohir in multiplayer to begin with so that he can block for ANY PLAYER multiple times that this is inconsequential. He can also receive Heir of Mardil as he has the noble trait (this also means Captain's Wisdom and other noble targeted cards can affect him as well!). Dunedain Warning, Gondorian Shield (which combos with Steward), Dunedain Signal, Armoured Destrier, Elven Mail and Cloak of Lorien are all amazing attachments for Elrohir as well. So many nice attachments work well on him which means you not only have plenty of choice for what you want to put on him but you can include several of these cards in your deck to draw them more consistently and have the option to build him into an absolute wall of defense.

The Twins can be paired with Noldor Discard decks as they get boosted by cards like Lords of the Eldar, Tale of Tinuviel etc and both have the Ranger trait as well so can receive cards like Wingfoot etc and can be exhausted to pay for all the various player cards that need a Ranger character as well. The vast amount of choices and cards you can play on them or target them with is astounding. They can be used in Dunedain decks (defending/attacking multiple enemies per turn is perfect for a Dunedain build that wants multiple enemies engaged), Noldor decks, decks built around them, Ranger decks, Grey Company decks etc. Their two spheres tactics and leadership cover the vast majority of cards you want to actually use in conjunction with them as well which is ideal. The fact that they are so much better in multiplayer however means that other players can bring spirit or lore decks to play cards like Cloak and UC on them if you cannot. Can't think of any better target for receiving Ranged than Elladan and cannot think of a better target for receiving sentinel than Elrohir when playing multiplayer.

I think that Elladan is definitely the weaker of the two considering multiple and/or emergency defenses are almost always going to be more valuable than additional attacks as defense is integral to stop characters from falling in battle or heroes dying from undefended attacks and damage. That being said I think that they both have immense value. As a final note I would like to provide an example in which Elrohir is at a level that I believe no other defensive hero can get to. Lets say you have Steward, Shield, two Dunedain Warnings, Elven Mail and Cloak of Lorien attached. Elrohir can defend across the board with sentinel with a defense value of 8 (9 if the active location is a forest) and can keep defending for each resource you pay. It requires a hell of a lot of setup but he becomes near unstoppable. Lets say you went one step further and put Song of Wisdom and Burning Brand on him. Bye bye shadow cards and effects! Now yes you can achieve a similar effect with other defensive heroes by attaching cards like UC or Destrier to get additional actions and defense. This means that you can't then play those nice readying attachments on questing or offensive heroes however and you are never going to top the fact there is no limit on Elrohirs ability. Beregond even with 3 UC's attached is still limited to defending four attacks, Elrohir with 6 resources can defend a whopping seven attacks.

Even though I recently retired the Twins in my decks I will always have a soft spot for them. They are highly underrated heroes that can more or less lock down and keep control over combat on their own when paired up. They combo nicely with so many other heroes, builds and player cards that you always have plenty of options when using them and can even have them in play in different decks but still gain their buffs and fantastic contributions.

Psychorocka 461
I recently built a deck with the brothers specifically for a nightmare quest, and they were pretty good! They are, indeed, underused... — Lecitadin 184 10/3/16
I definitely agree that these two can get overlooked. Obviously, the fact that they need to be used together to work properly means they won't get splashed in any decks, so really require a deck to be built around them. When you do though, it can lead to some really fun play experiences. — HootsFromErebor 47 2/8/17