Action: Draw 2 cards. Then, discard 1 card from your hand.

"These are Daeron's Runes, such as were used of old in Moria..."
Gandalf, The Fellowship of the Ring
Carolina Eade 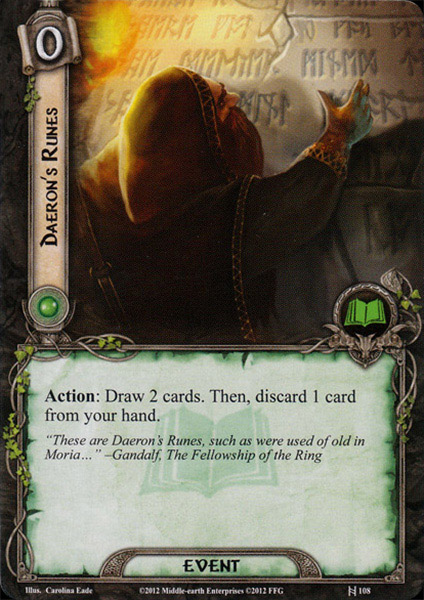 I would argue that Daeron's Runes should be a three-of in every deck that has a Lore hero. Conventional card game wisdom goes that you should build the smallest deck possible, so as to get your most important cards early and often. Three copies of this free, instant draw effect - for most purposes - reduces your minimum deck size to 47, with the barely-existent drawback of having to discard something afterwards. You'll almost never have a full hand of things you immediately need or can't replace, and you'll often want to dig for a specific card that you need more than what you currently have. You'll also probably have extra uniques to toss at some point, or cards that you can interact with in the discard pile later.

NoSoup4you 752
I started using this card. Thanks for the recommendation. I made a deck with Elrond, Daeron's Runes, Vilya, and Will of the West and it has been awesome. Been able to get Vilya out quickly and if I happend to throw something away I need now, I can still WotW a card back into my deck. — k_rock 18 6/9/20
is this card really that good? I mean, you draw two cards for free, but since you have to discard another card and you are using daeron's runes, when all is settled, you have the same amount of cards in your hand. I know it helps find you important cards, but it's not really card draw. I feel like King under the Mountain is better. — BlackArrow 265 6/14/22
Daeron's Runes is powerful not because it draws cards, but because it successfully thins your deck for free. This is similar to why people will throw in 3x We Are Not Idle to optimize start for any deck running leadership. — kjeld 463 6/14/22
7

I find it weird that this card has only one review, so i decided to make sure that everyone know this is the second best card in the game, after steward of gondor. If you're running lore, you need to run this, 3x. It makes you go through deck way faster, and the selected discard means you can ditch the least useful (or useless) card at the moment and keep going. It's a card that makes foundations of stone a good expansion to purchase multiple copies of.

This is literally the most broken card in the entire game. And I mean design-fail level flawed one. It just must be auto-include in any deck able to cast it (having hero with a lore resource icon, or Song of Wisdom). The card costs nothing. It replaces itself, filters a player deck and you can even play it when you draw it and quest prevents you from getting any resources (I mean no rebuy, just zero cost). Imagine you have two combo piecies in your deck and no limit for a number of copies in a deck. Would you be better running 25 card A and 25 card be? Or one copy of card A, one copy of card B, and 48 copies of this madness? You could draw 15 cards A in a row and never assemble the combo. Similarly, you must have noticed how Surge keyword is anoying. Imagine simple treachery card: "The first player chooses a character. Deal 1 damage to that character. Surge." Well, encounter deck consisting only of copies of such card would make you lose on the spot! In Magic the Gathering, this would be the best card printed ever, like 500% than Black Lotus. I don't get how this could ever see print.

Benettnash 19
I personally disagree that this is the most design-warping card in the game (I'm more partial to thinking so of Smoke Rings myself, as it necessitates limits on the number of Pipes they create) but I definitely agree with you that it is broken. Yes, FFG, free card draw/filtering is good. — AlasForCeleborn 525 3/15/21
I disagree with your comparison to Black Lotus. Black Lotus was broken because it was always to good. Daeron's Runes is broken because it is never bad. A MTG with Lotus gains a far larger advantage than a LOTR LCG deck with Runes. — NERD 614 11/30/22
2

DunYoss 31
There are quests in the Voice of Isengart/Ringmaker Cycle that punish you for drawing cards that also fall in this category. Otherwise you're right. — Roka 1406 8/1/21