You may spend resources from Elrond's resource pool to pay for , , and allies.

Response: After a character is healed by another card effect, heal 1 damage on it.

"But you do not stand alone."
The Fellowship of the Ring
Magali Villeneuve 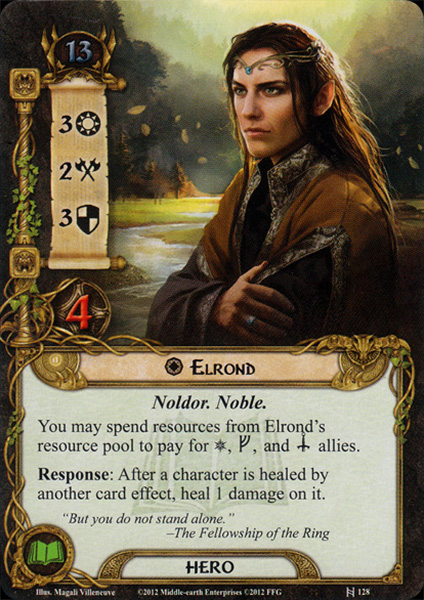 I'm surprised there aren't any reviews for Elrond yet, considering how powerful he is, hero Gandalf or no. Although I suppose it is quite evident. It's going to be a tall order summarizing his perks, so let's get into it.

Two attack is reasonable, but I don't think anyone would ever use him for that, considering his usefulness in other ways. The first thing you notice, other than his thirteen threat, is his willpower. Three willpower is quite good, especially if you can get him Light of Valinor or Unexpected Courage, both of which fit him well. So what will you do with his extra action? Well, a three-four defense line is top-notch. His first ability amplifies any healing, so that makes him an even better defender. I should take the time know to point out the power of that response. He's amazing in any quest with a lot of direct damage, and combo-tastic with the in-sphere Warden of Healing. Of course, no super defender would be complete without Burning Brand, which, Whoop-dee-doo, is in-sphere. But Wandalf! you say, How are you going to reliably fetch all these attachments that make him so good? Why with the Master of the Forge, of course! Who is conveniently (wait for it . . .) in sphere.

So, next, his passive smoothing. This effect is underrated and is one of the best things about Elrond. Having the initiative to slot any ally you want into your deck on a whim, knowing that Elrond will be able to play it. Resource generation makes this much smoother and more reliable, so go ahead and put in Steward for Master of the Forge to pull. And finally, Vilya. The swiss army knife MacGyver of all swiss army knife MacGyvers. Elrond was already OP, and this card puts him over the top. I've convinced myself while writing this that Elrond is the most powerful hero in the game. You tool tour deck (which, if you've been paying attention to this review, is kind of pre-built) to blind Vilya, but its true power comes from lining up your shot with Imladris Stargazer or ally Gildor. If you don't like what you see, reshuffle with the MotF. And them, play a card for free! Turns out that's pretty good in practice.

And what's the downside? His traits? Well, not with Noldor there in pretty Italics. Nothing! Other than his completely mitigateable threat cost (that's a word, right), the Lord of Rivendell is pure gold.