Action: Exhaust Ithilien Tracker to lower the of the next enemy added to the staging area to 0 until the end of the phase.

Green gauntlets covered their hands, and their faces were hooded and masked with green, except for their eyes, which were very keen and bright. The Two Towers
David A. Nash 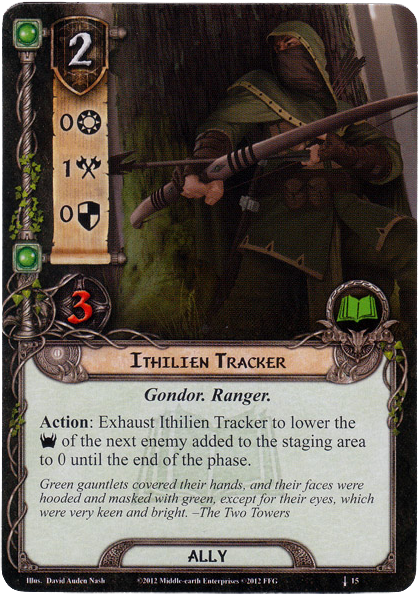 In 4 players I think this ally can be quite useful, since you will very often reveal at least an enemy and so it might easily end up "questing" for 2-3 which is not a bad value for 2 resources in Lore. A repeatable (even if conditional) Radagast's Cunning is very useful in my opinion, and it also comes with a good pool of Hit Points attached for all those archery quests.

Alonewolf87 1649
Except it’s an action and not a response, so you have to commit him before staging, making him much much worse. If this was a response he would be golden. — Mathrandir 46 7/25/19
You are allowed to trigger actions after staging. there is an action window for that, if I'm not mistaken. Meaning you could wait till after staging and decide if you want to use his ability or his attack. — chumbathewumba 5 6/28/20
never mind. I read his ability wrong — chumbathewumba 5 6/28/20
I don't think you cam trigger after an enemy has been revealed, as the card reads 'the NEXT enemy added'. However, it doesn't specify the next enemy revealed that turn/round, so technically that means it still applies next turn (ie after refresh), but i suspect that is an oversight — Dor-lomin 82 12/21/21