Action: Spend 1 resource to exhaust Súlien. Then, each location in the staging area gets –1 until the end of the phase. Any player may trigger this action. 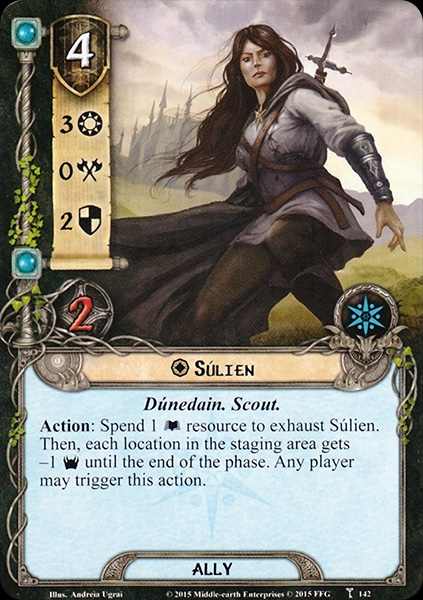 First off, I think there’s a question on name pronunciation. Is it Su-LI-en? Su-li-EN? Su-lene? Like Sulene. Sulene. Sulene. SuleeEeeEn. For solo play, can’t be my Dunedain. You look like a hardy lass Like you could kick a cave trolls ass. Ain’t no one give you any sass Sulene. Su.... Anyway, this Spirit ally has a hero level willpower that at first seems amazing but she’s expensive. And she’s in the Spirit sphere which already has a lot of willpower. There’s at least a half dozen 2 cost 2 willpower allies which means for 4 resources I can get 4 willpower and I don’t have to save up to do it. With a couple of 2 cost, 2 willpower allies, I can chump one and still have 2 willpower. It’s a lot harder to sacrifice a 4 cost ally.
And if the cost wasn’t high enough, to use her special ability, you need to spend a Lore resource. So if you’re playing solo, you’ll have to start with two Spirit heroes generating only two Spirit resources a round. Compounding that, when playing Spirit, I like to reserve a resource for cards like test of will. Sullen is not an easy card to get out. As an aside, the designers do a great job of matching stats and abilities with the card art in this game. Sulien falls a little short in this department. How can a badass Dunedain with a giant sword on her back have zero attack? I imagine it’s hard to travel with a heavy sword. Maybe its just a hilt that’s actually a knife/fork/spoon set in disguise representing enough threat to ward away would be mashers at the Prancing Pony. Two defense isn’t awful but Sulien is a bit fragile at two hit points. As for her special ability, I can see it working in multiplayer where more locations can pop up. Sulien has to be exhausted to use her ability so you she can’t quest. That means there has to be at least four locations in staging to make it worth using her ability. If I’m playing solo and I have four locations in staging, I’m getting really nervous about location lock and wondering what good is a three willpower ally if locations are piling up.
So she’s a niche card. Not great in solo but decent in multiplayer. In conclusion: If four resources I must pay, The northern tracker I will play, So in my binder you will stay Sulene.

gollumsmells 32
She can actually combine well enough with Spirit Aragorn, to make his ability easier to trigger. — Alonewolf87 1649 11/2/21
The lore resource is also much easier with Ring of Barahir also being in spirit, if you are already using Sporaragorn — LEGOlas 107 2/17/22