Reduce the cost to play Halbarad by 1 for each enemy engaged with you.

Each enemy engaged with you gets +10 engagement cost.

"Halbarad Dúnadan, Ranger of the North I am..."
The Return of the King
Adam Lane

The Flame of the West #6. Leadership. 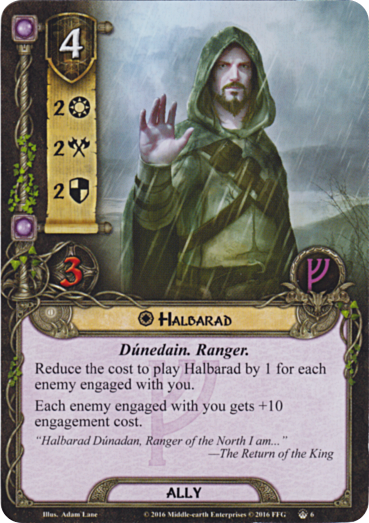 A unique ally with very good stats and the chance of being played quite cheaply in a big Fellowship where ending up with at least 1-2 enemies still engaged in the planning phase is not so uncommon. Even at full cost it might still be worth it, especially in a usually rich mono Leadership deck. It also has surprisingly a good sinergy with Hobbit decks, perhaps to show all the work the character did in the book to keep the Shire safe.

Alonewolf87 1585
Agreed, I think he's a really solid ally. When I first saw him I misread his second ability and thought it applied to all enemies, which obviously would have been extremely powerful. As it is stands it is decidedly much more of a niche ability, although you can combo him with cards like ally Boromir and Farmer Maggot, and as Alonewolf mentioned above many Hobbit cards. He'd be great in Dúnedain decks if not for the fact that he conflicts with his hero counterpart, which is pretty essential for that archetype, so that's unfortunate. Otherwise a neat card, and I'm surprised he hasn't been reviewed more. — ThimYorke 33 5/6/20
Also, has anyone else noticed how fun it is to get Halbarad and Andrath Guardsman in play together. They both hold their hands up, Halbarad his right, the guardsman his left... — bobbymcbobface 594 5/6/20
haha I never noticed that before :) — Daughty Ranger 28 7/3/22