After him thundered the knights of his house... -The Return of the King
Sebastian Zakrzewski

The Dungeons of Cirith Gurat #112. Tactics. 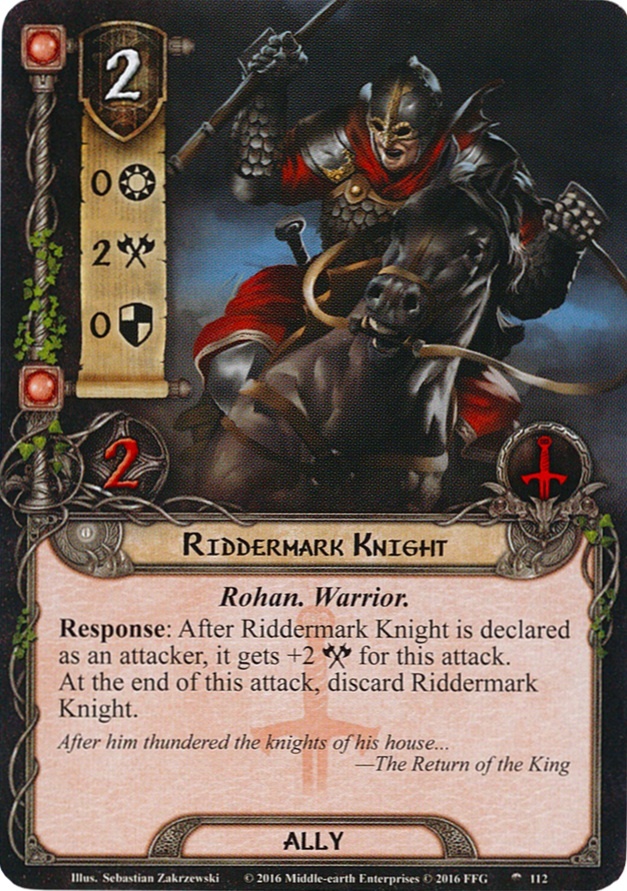 I've grown to really like Riddermark Knight as a help to my attacking force in any deck with . I'm usually on board with allies with 2 cost for 2 of any stat, and this one I like better than most. I normally play a copy or two of these guys, and then let them help with attacks until I get swarmed or I have to kill a boss enemy. I like the two hit points for either a 1 archery damage soak or helping this guy to stay alive against ally-damaging treacheries, which constantly take out my other 2 cost-2 stat favorite, Galadriel's Handmaiden.

Truck 1228
I like how its not a forced effect like on escort from Edoras but rather a response, meaning that you don't have to trigger it and lose him right away--you could use him just for his 2 attack and save his boost for later — BlackArrow 250 7/12/22
Same here. EfE would be so much more usable if it was a response, but I think it was a little early for them to release a card like that. FFG seemed really scared of making cards too OP in cycle 1.really — Truck 1228 7/16/22
2

A good cost-to-attack value, with the potential for big attack burst in a pinch. Very much worth in my opinion if you have the deck space and you want to be able to clean house more easily. Good combos with Gamling or Westfold Outrider.