Action: Discard 1 card from your hand to give Éowyn +1 until the end of the phase. This effect may be triggered by each player once each round.

Slender and tall she was in her white robe girt with silver; but strong she seemed and stern as steel, a daughter of kings.
The Two Towers
Gabrielle Portal 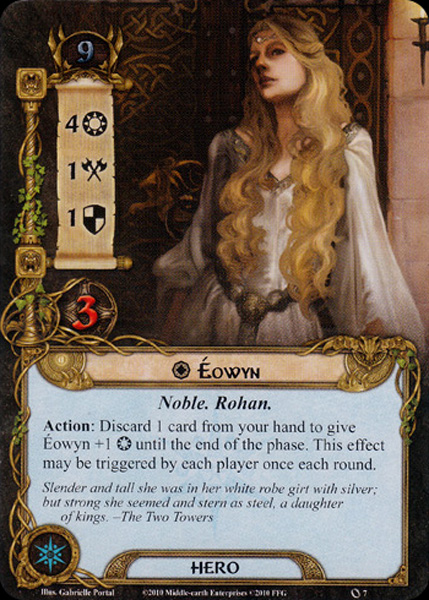 Eowyn is the most powerful quester in the game. Period. The only other characters with four willpower are T eowyn, Cirdan, the ally Gandalfs, and hero Galadriel. Now Galadriel requires Nenya, and the ally Gandalfs either raise threat or leave play. Cirdan and T Eowyn give her a run for her money but in a four player game Eowyn can bump up to a whopping 8 willpower for only 9 threat cost and a few discards!

Wandalf the Gizzard 2003
This is my favourite hero. Having 4 willpower and to the extend, 5 with a discard, she can quest solo in the early stages and helps gather progress token quickly. Currently, I aim for The Favor of the Lady (+1 willpower) and make her even more powerful. — theodoros 15 2/17/18
I'm new and need a little advice please. if I attach Unexpected Courage to Eowyn, after she has quested for 4 and I ready her using Unexpected courage, can she then quest for another 4 points bringing her total to 8? — ABP1984 12 11/1/21
No. You can only quest/attack/defend once per character — Truck 1261 11/1/21
Thank you Truck! — ABP1984 12 11/1/21
Not true. You can’t commit to a quest twice (you are either committed to it or you aren’t!) but a character can defend, ready, defend again (or attack, ready attack etc) there is no such restriction as “once per character”, they just need to be ready. — Ryucoo 1 11/20/21
Well, you can't attack twice with the same character against the same enemy — LEGOlas 107 7/7/22
3

The best hero for questing in the game for me so far, sometimes she's so needed, its nearly annoying. She's also the one with best combos in the game, allowing me to use cards in the deck without the source for the sphere among heroes, mainly with Stand and Fight. I hope that there will be other heroes with discard ability in the future, which can do the same. Beautiful artwork. Verdict: 5/5.