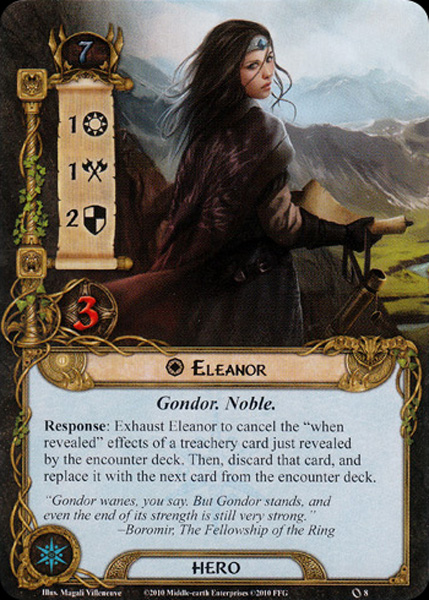 SecondhandTook 533
I'd there an action window between cards during staging? I thought the Eleanor Unexpected Courage combo didn't work, but I might be wrong. — jodudeit 24 4/16/16
you may be right actually :P — SecondhandTook 533 4/17/16
you are correct, the unexpected courage is an action ability whereas eleanor's ability (like test of will) is a response. responses can be trigger whenever their text specifies, actions only during an action phase. when cards are revealed from the encounter deck, that is the staging phase, which does not allow action abilities. still, she's a beast in multiplayer — breeduss 5 11/5/17
16

matrosh 459
Aside from the mandatory Lore of Imladris, her and Denethor allowed me to finally beat Journey to Rhosgobel. 10/10 would Exhaust again. — Blackhaven 1 8/1/19
Don't write her off quite yet, I having been playing her solo along with Tactics Legolas, Spirit Glorfindel and Hobbit Gandalf and have defeated many quests thanks to her as a backup defender, saving me from nasty treacheries (usually the ones that get attached as conditions). You need your other heroes to be strong quarters/fighters and it's why she pairs up well with ally Gandalf that can quest and combat each round. In two player with my wife she has saved many a game from a sudden end. — Christian_Medic 869 9/8/19
5

What's up with this card? Erebor Record Keeper can scribe a scroll without looking at it. Not so much Eleanor. No beard, either. ERK has a beard. Eleanor can't really attack or defend. ERK lets you know this right on the card. The exhaust cost is steep considering the shadow card gets replaced. The replacement card also gets revealed Eleanor would make a good ally, but I don't think the card cuts it as a hero most times.

MarvelsTold 4
In 4 players I almost always bring her, cause you will face very often game-ending treacheries and Test of Will is limited in number (and might not have been drawn in time) — Alonewolf87 1655 3/19/22
Does that get her a beard? I guess it depends on what a player is willing to gamble. It's that second draw that's a concern. I'd bring her to Road to Rivendell for one card or for secrecy. — MarvelsTold 4 3/19/22