A Test of Will

Response: Cancel the "when revealed" effects of a card that was just revealed from the encounter deck.

"There is naught that you can do, other than to resist, with hope or without it"
Elrond, The Fellowship of the Ring
Ryan Barger 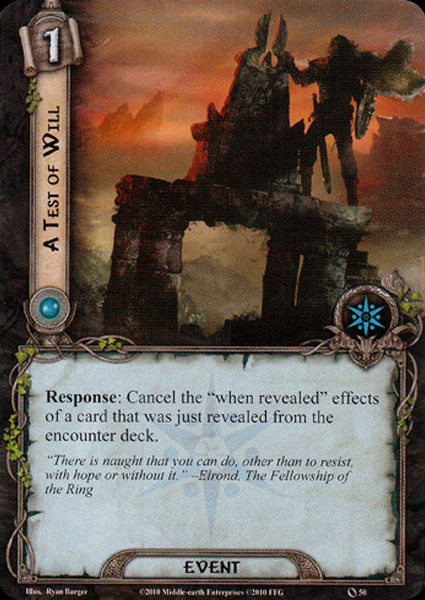 A Test of Will is a card which I can never leave out of a deck that uses . The moment I resolve on that sphere I put in 3 copies of Test of Will. And that's one of the reasons why I really dislike the card. To be clear before I start complaining about it, A Test of Will is possibly the best card in the entire game for pure power. One resource cancels a When Revealed effect from the encounter deck, no other conditions, that effect just straight up doesn't happen. The effect is demonstrably worth paying more than that 1 resource for given how often people will pay extra by playing Dwarven Tomb to retrieve it, or Map of Earnil to retrieve Dwarven Tomb to retrieve Test of Will. And the fact it's so easy makes it to my mind the biggest example in the game of an auto-include card by a very wide margin. It's just so universal and so easy that you can't justify omitting it, and that makes for boring deckbuilding.

It also raises issues with regards to encounter deck design because really quests should be designed on the assumption that the effects in the encounter deck will actually happen. Now I want to be clear - I'm not necessarily advocating for there to be no cancellation of When Revealed effects in the game at all, it's just that Test of Will is a bit too easy, being only 1-cost and no other restrictions on it.

Now earlier in the life of the game there were some treacheries which had ridiculously brutal effects - the infamous "cancel-or-die" which is another thing I really dislike in this game. But my logic here is that those cards were created under the (in my opinion flawed) mindset of "It's fine, because they can cancel it with Test of Will." Following that logic through, if it was either not possible or at least not as easy to cancel such effects, then "cancel-or-die" effects wouldn't be a thing (Since one would at least hope the designers would stop short of effects that were effectively just "die"). Therefore if A Test of Will didn't exist (or was more expensive in some way), then Sleeping Sentry (and similarly ridiculous cards) wouldn't exist, and I feel like I might prefer that version of the game. I feel like it'd be better balanced that way.

Regardless of feelings on how it would have impacted the game balance, I think it's pretty clear that a card of such incredible power as Test of Will absolutely would not be released nowadays. I mean, imagine if Test of Will wasn't in the Core Set, so our only cancellation was Eleanor (or perhaps go even further and imagine Eleanor didn't exist either). Imagine that was the case, most or all decks in the game had no means of cancelling When Revealed effects for 5 years, and then Test of Will was released in the latest adventure pack. People would go crazy about how overpowered it was. The only reason it tends to get a pass is because it was in the Core Set so everyone's used to it existing at this point and they don't really think about it. Or if they do think about it, then it probably saved so many games for them that they naturally feel well-disposed towards it. If a card like Test of Will were released now, it would be more expensive or more limited. It wouldn't just be a 1-cost event.

And then again, I'm also not in any way advocating for the removal of Test of Will from the card pool, and I will continue to include 3 copies in every deck I build forever, most likely. If I wanted to remove it, I'd need to somehow acquire a time machine so I could go back and stop Nate French putting it into the Core Set in the first place, and then we'd see the ripple effects impacting the design of treacheries. Since it was in the Core Set, it's way too late to change it now because the game has been designed to some extent to allow for it existing. That said, I do sometimes find it refreshing when I play more recent quests (which don't have the "cancel-or-die" problem) to use decks without , so when a treachery is revealed there's no lamenting my failure to draw cancellation, no debate over whether this is worth cancelling or if I should save it for something worse later on, the effect just happens and I have to deal with it happening.

In conclusion/summary, Test of Will is a ridiculously powerful card which you should basically never leave out of any deck that can play it. Perhaps we may speculate that things might have been better had it never been created, but even if so it's no use lamenting a past which we cannot change. As Gandalf says, "All we have to decide is what to do with the time that is given us." And in this case, that involves simply accepting that this is one of the most, if not straight up the most powerful card in the entire game, and thus that 3 slots in every deck are automatically spoken for regardless of anything else.

Arguably (and in my opinion) the single best Card in the game.

A Test of Will in my opinion is the best Card in the game. Beginning with the treacheries (and other "when revealed effects') quests from the earlier cycles, which are often pretty nasty, to the often downright ruinous ones of later cycles, the power to simply say "No" to the Encounter Deck (and at an incredibly cheap cost of 1 resource on top of that and with no strings attached) is insanely good.

I have yet to construct a Deck that contains at least 1 Hero, in which A Test of Will would not be a "automatically include this 3-times" Card.

On the contrary for a lot of treachery-heavy adventures, i have at least considered (and often ended up) putting in at least 1 Hero in each of the players decks (i usually play 2 player games and usually construct both decks), so impactful is A Test of Will.

As an anecdote, i think many players got their 2nd (and maybe even 3rd) core set primarily for more Unexpected Courages or perhaps an additional Steward of Gondor, quite a few of these players might initially not have realised (to be honest both I and the 2 people i played with back then didn't) how impactful the extra A Test of Will would be on the decks performance (and in the case of 3 core sets, the option to include 3x of it it in more than 1 players deck as well...).

This card is almost an auto-include on any Spirit deck I've ever made and will make. The versatility of the card (In contrast to Eleanor you can cancel more than just treachery cards) at the low cost makes sure that even the nastiest of cards (Sleeping Sentry, anyone?) get blocked by this.

Sorcerious 9
It's basically the first card I grab when making a Spirit Deck — shuggacheez 8 3/27/16
The only reason I don't run three of these in every spirit deck is I only have one core set. Staple card that will never be bested. — jodudeit 24 3/30/16
Thankfully &quot;The Door is Closed!&quot; has given us an alternative to Test of Will and is actually better in every sense of the word. — widowmaker 185 4/2/16
3

This is without doubt the single most powerful card in the game. You have to pass a test of will to leave it out of your deck!

Personally, I think it's too powerful. I think it should make you draw another encounter card, or at least shuffle the cancelled card back into the encounter deck.

Being able to cancel any when revealed effect with no drawback is highly unimaginative. Yes, you're limited by only having 3 copies in your deck and so you my be forced to choose when to make use of it but as soon as you understand to only use it in a game ending situation the illusion of choice is shattered. Also, with all the recursive cards available to it isn't hard to pretty much cancel most encounter card effects once you've got hold of a copy of test of will.

I have to agree this is must have card in deck. But I'm glad I have only 1 core set, so I use only 2 copies of this card in deck. It would be good to learn to play without it, but basically, in some cases, I f you want to win, you'll go for it. There is no doubt about it. Nice artwork. Verdict: 4/5.