Reduce the cost to play Map of Earnil by 1 for each hero you control with a printed resource icon.

Action: Discard Map of Earnil to play any event card in your discard pile as if it were in your hand. Then, place that event on the bottom of your deck. 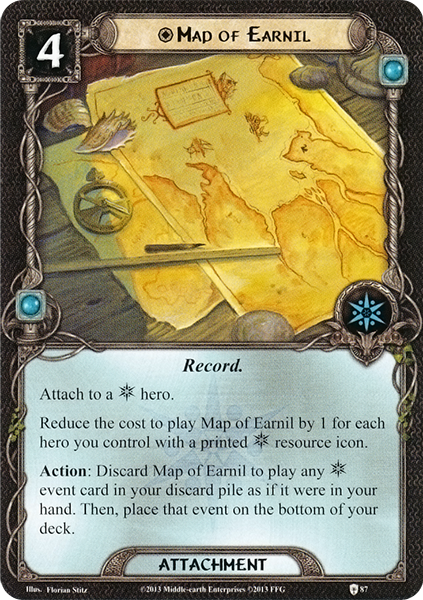 So the Map of Earnil in . At first glance this seems less useful, since the events you most want to recycle are responses - well, mostly just A Test of Will, but sometimes getting multiple Hasty Strokes could be good too. The Map doesn't do those however. On the other hand, if recycling your cancellation is super important, you can use the Map to recur Dwarven Tomb to recur either of the cancellation events and play the same copy 3 times for one event, one Tomb and one Map (4 times if you manage to retrieve the Tomb from the bottom of your deck afterwards). But those two are far from being the only important events. Being able to recur threat reduction like Elrond's Counsel or The Galadhrim's Greeting can have a huge impact over the course of a full game, especially if the quest is threat-heavy. In a Caldara deck of course being able to play Fortune or Fate as often as possible is very important. Lay of Nimrodel for big quest pushes, Shadows Give Way for ultimate security in combat for multiplayer games, Stand and Fight to muster more allies, or perhaps Power of Orthanc for quests with nasty conditions in them all strike me as good options as well - and I will once again remind you that you don't need to choose which event you recycle until you actually do it. The final two points I would make are that mono- is perhaps a more common setup than some other mono-sphere options, since with the release of more combat-capable and neutral characters it has become more able to do everything, and it also can work simply if you just want a very focused, dedicated questing deck. The second point is that the sphere also has the best natural synergy with this kind of discard shenanigans - between Caldara, Stand and Fight, Dwarven Tomb and Will of the West, they can already bring things back from their discard pretty well, and they also include multiple effects to discard those cards in the first place such as Éowyn, Arwen Undómiel, Círdan the Shipwright and Zigil Miner. That natural synergy sets up to work incredibly well with its Record attachment even if one might argue that it doesn't have quite the juiciest targets for it.