Action: Choose a hero in any player's discard pile. Put that card into play, under its owner's control.

'Yes, fortune or fate have heped you,' said Gandalf, 'not to mention courage.'
The Fellowship of the Ring
Igor Kieryluk 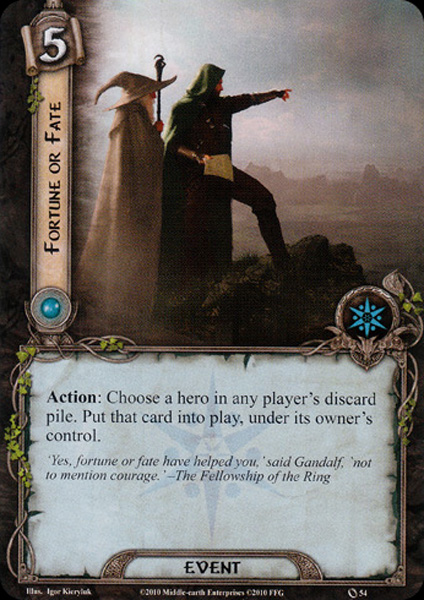 This card is like safety wheels on kid's bike. Once you master the riding, you will put them away. It's same here, beside some very specific cases. It saved a lot of first games, then it stayed in hand and now it waits in box for my girlfriend. Very nice art. Verdict: 5/5.

matrosh 368
Until the errata, caldara never took off these training wheels — SamthemanGamgee 449 7/5/18
1

This card is pricey but it works amazingly in a deck type other than Caldera. Beorn. You can use the great Bear freely to defend as much as you want, soak up archery damage and then when he dies you can actually use this card on him to bring him back to do it again. Best part is if you pair him with Elrond and Vilya then it's free to bring back the bear. Gandalf makes a great third hero but you will want to pack on lots of threat reduction if you go that route.

Christian_Medic 793
If you go with Beorn it might be more useful to pack Landroval (and some honor guards) at least they are in sphere. The Houses of Healing might be cheaper in the right deck. Another possibility is to use this event with a Spirit Hobbit and Good Meal. — Alonewolf87 1506 7/19/19
I actually run Landroval and Honour Guards in the deck as well. But sooner or later the bear does go down if he is your exclusive combat hero. That's why Fortune or Fate, 3x The white Council, the Will of the West and Dwarven Tomb make up parts of that deck too. — Christian_Medic 793 7/19/19
Here is a sample deck: https://ringsdb.com/decklist/view/12635/beorntheundying-1.0 — Christian_Medic 793 7/19/19
1

Fortune or Fate have helped me not play Fortune or Fate. But seriously, if you're planning on losing a hero, you're in pretty bad shape and not likely to aquire those five resources. Granted, it along with houses of healing are the only hero recursion effects out there, but at five resources? Of course if you're running Caldara.....

Pretty much limited to Caldara decks still, where it forms the backbone of that strategy. Otherwise, not all that great. I think the main reason I'm dissuaded from using Fortune or Fate as a general purpose safety card isn't just the high cost - which can be mitigated with Map of Earnil and any discard effect - but the fact that you won't get a dead hero's attachments back with it. Usually when a hero dies, there's no coming back, because you also lost any cards and resources you invested in building them up. A dead hero also is often a result of your board failing in general, which isn't solved just by bringing them back - especially if you're paying the full 5. On the occasions where someone just gets unexpectedly ganked in the early game, you likely won't have the means to play this without destroying your momentum anyway. For these reasons, it remains a gimmick card.