Reduce the cost to play Book of Eldacar by 1 for each hero you control with a printed resource icon.

Action: Discard Book of Eldacar to play any event card in your discard pile as if it were in your hand. Then, place that event on the bottom of your deck. 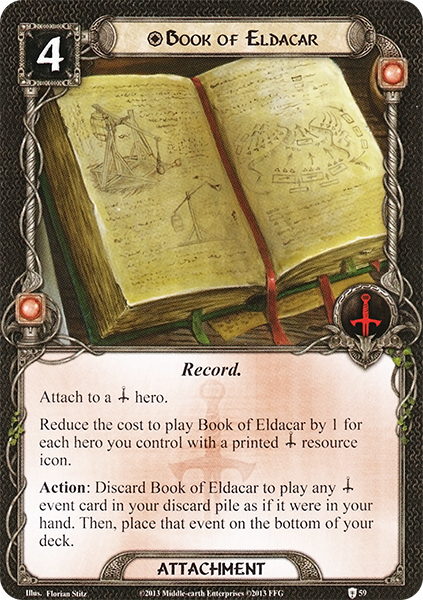 So the Book of Eldacar in . There are plenty of events which are worth recurring, whether you want attack cancellation with Feint or Thicket of Spears, direct damage with effects like Skyward Volley, Pursuing the Enemy, Hail of Stones etc, or any other weird and wacky things you may think of. Unfortunately you can't use the Book to recur Foe-hammer, since it's a response, not an action. There are to my mind two significant flies in the ointment however - one is that if your deck is mono-, it probably has enough combat power that it doesn't need to depend on such tricks, much less repeating them over and over. The second is the existence of Háma, who already recurs events by attacking with no additional setup required. Admittedly he then forces you to discard cards, but you can bring them back again later if they're events, you probably don't need everything, and since unlike the Book, Háma can recycle Foe-hammer, it's easy enough not to run out. Of course Háma can only attack once per round, so maybe you run the Book as well to increase your recycling potential, but on the other hand you could simply run Rohan Warhorse to get additional attacks out of Háma. That said, Háma may be better suited to a multi-sphere setup rather than mono. In the end though, for me it mostly comes down to the initial point - I don't play mono- that often, preferring to mix it with something else, and when I do, it most likely means a very focused combat deck which doesn't need to recycle its events to kill everything. Add in the Háma factor and I'd view this as the least valuable record, certainly my least used.