Reduce the cost to play Tome of Atanatar by 1 for each hero you control with a printed resource icon.

Action: Discard Tome of Atanatar to play any event card in your discard pile as if it were in your hand. Then, place that event on the bottom of your deck.

The Blood of Gondor #109. Leadership. 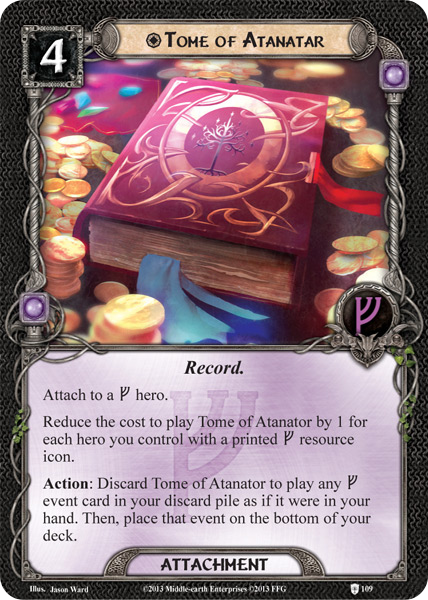 So Tome of Atanatar in . Now I should mention that I don't actually play a whole lot of mono-, generally pairing the resource generation with another sphere. But when I do go mono-, I'm always struck by how ridiculously powerful it can be. The Tome has arguably the absolute best targets for event recursion in the game with Sneak Attack (to combo with Gandalf, naturally) and Strength of Arms, which makes mono- phenomenally powerful all by itself without any other help or the ability to recycle it. Honestly I think I could just stop there and consider that a reasonable case for marking the Tome down as the most powerful Record, but let's continue. Reinforcements can be great for similar reasons to Sneak Attack, and is even better in multiplayer. A Very Good Tale is another incredible card in the right deck, and being able to recycle it (including perhaps if one use of AVGT discarded another copy of it, which can otherwise be a hazard of using it) just mutliplies up the rate of your ally mustering. Lure of Moria for Dwarves and Grim Resolve for everyone if you have the resources (which in you quite possibly do) are incredibly powerful effects similarly to Strength of Arms. Speaking of having lots of resources, a Dwarf deck could get considerable value out of recurring We Are Not Idle, or if everyone's happy to eat a threat raise, Legacy of Númenor can boost everyone. Finally, in a 3 or 4 player game, just getting another play of Campfire Tales could be well worth it for the round-the-table benefit to everyone. While not quite on the level of , the sphere does have some ways to discard cards between Erestor, King Under the Mountain and A Very Good Tale, and it also likely has the resources to just play its events as it draws them, then recycle them afterwards. Plus there's always the option of Second Breakfast to bring back the Tome after using it as well. I would say has a majority of the massive game-winning effects, and being able to use them more often can just get ridiculous.

Warden of Arnor 5208
I just added the Tome to my Silvan deck (featuring Celeborn and Thranduil), and I'm loving it's utility as a panic button to call Feigned Voices from the discard pile in a pinch! — ironwill212 169 1/7/23