Play only if each hero you control has a printed resource icon.

Action: Ready each ally in play.

And so the companies came and were hailed and cheered and passed through the Gate, men of the Outlands marching to defend the City of Gondor in a dark hour... The Return of the King
Jon Bosco 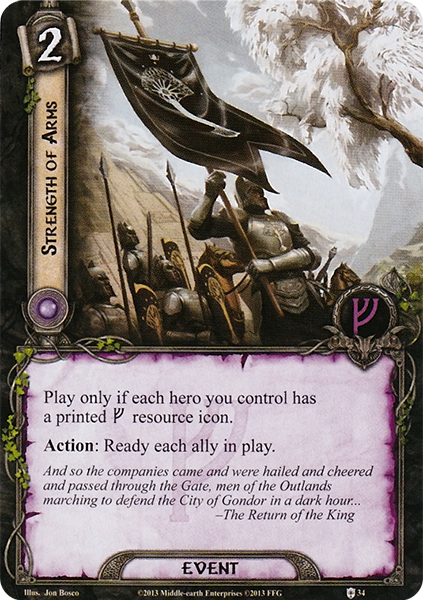 This is one of my favourite cards from the Against the Shadow cycle, and one of the most compelling arguments we have for playing mono- from time to time. Compare to Grim Resolve from the Core Set - that card readies heroes as well as allies, but it costs a whopping 3 resources more. How significant that difference is I suppose depends on how significant your heroes are as opposed to your allies. Some decks focus hard on just beefing up their heroes to handle everything, with the allies being more incidental. But mono-? One of the most obvious things to do with any mono- deck is to just swarm allies, be they Dwarves with Dain Ironfoot, Gondor with Boromir and Visionary Leadership, or just a general selection of good allies (possibly from out of sphere brought in through other swarming effects like the Herald of Anórien or A Very Good Tale). So if you have a swarm of allies just ganging up on the encounter deck to win through sheer numerical superiority, not to mention global boosts like the aforementioned Dain, Boromir/Visionary, or others like Sword that was Broken, Faramir, For Gondor! etc, getting all of them to do two things in a round makes a huge difference. Quest for a ton and wipe out all of your enemies in the same round? Sure, why not. No big deal, because for this round you have access to the power of two armies rather than the usual one.

And all this is just talking within a single deck. Bring this card to multiplayer where everyone is running ally-heavy decks? Sure, let's pay 2 resources (which you can easily afford because you're mono-sphere and specifically in the sphere with all the resource generation) to ready about 30 characters across the board. You blow up the quest, kill all the enemies and have a few utility actions left over while your heroes can just sit back and take a nap because you don't really need them except to provide the resources and stop you losing the game.

The attempts in Against the Shadow to push a whole mono-sphere archetype into the spotlight of the metagame largely failed in my opinion, but mono- specifically got a massive power boost just from this one card (to say nothing of the possibility of then recycling it with the Tome of Atanatar for even more ridiculousness). Just an incredibly powerful card.

Warden of Arnor 5145
I'd say the other spheres made out fine with the mono-sphere focus in Against the Shadow. Spirit got Caldara, which led to a phenomenal new deck archetype. Lore got Mithrandir's Advice, which is insane, especially when it starts comboing with all the other Lore draw. (Advance Warning ain't too shabby, either.) Tactics got... well, Tactics got hosed, but at least Tactics already had Thicket of Spears from way back in the core set. — Some Sort 3162 6/6/16
I'd debate Caldara. I mean, I love Caldara, but she doesn't really incentivise mono-Spirit in general. If you're building a mono-Spirit deck you don't go &quot;Oh, I have to put in Caldara, she's great in mono-Spirit!&quot; You only put Caldara in if you're specifically building a Caldara deck, and it just happens that Caldara decks are necessarily mono-Spirit. She didn't really give a boost to mono-Spirit in general. Mithrandir's Advice I'll grant you. But my point wasn't that Leadership came out super well from the AtS mono-sphere focus and the others didn't, it's that none of the spheres got that much out of it. They each got maybe one or two decent cards, which didn't do a whole lot to shake up the meta and put mono-sphere into the spotlight. Just gave nice, or for Leadership and ore, bonkers options that people could call on if they were playing mono-sphere anyway. — Warden of Arnor 5145 6/8/16