Action: Put 1 ally card into play from your hand. At the end of the phase, if that ally is still in play, return it to your hand.

There is a seed of courage hidden (often deeply, it is true) in the heart of the fattest and most timid hobbit, waiting for some final and desperate danger to make it grow.
The Fellowship of the Ring
Winona Nelson 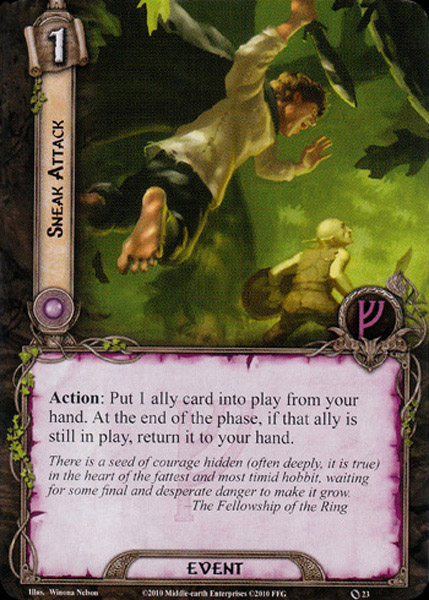 This is a very useful and potentially a very versatile card, though in a majority of cases its versatility is disregarded and it just gets joined at the hip to Core Gandalf - it can work well in many more contexts than that though. The effect is simple - at a cost of 1 resource you put an ally into play for a single phase. Since most allies cost more than 1, you're most likely getting an effective discount, perhaps using an ally you couldn't afford to play normally, but you only get to use them for that one phase (so most likely they only get one action) before returning them to your hand. It should be noted that there is no limitation on the sphere of the ally, so this is a means by which you can bring in out of sphere allies, albeit temporarily.

The utility of bringing an ally into play for just one phase is obviously twofold - you get their stats and you get whatever ability they have, so any ally which has something particularly good in either category may be a good candidate for Sneak Attack. In many cases of course allies with high stats also have pretty useful abilities, though what makes an ability useful for a Sneak Attack is not necessarily the same as what makes it useful for playing the ally normally. As far as stats go, options do not spring to mind for , since it's fairly rare for an ally to have more than 2 , though it's still an option if you're particularly short on willpower. I would generally prefer something which would allow me to adjust my after staging though. For and there are better choices, and it's easier to justify it as you have more available information - you know if you have one more enemy than your available good defences, or if you just need a little more to kill an enemy, whereas Sneak Attacking an ally for questing is always more speculative unless you've scried the encounter deck. So combat is friendlier to Sneak Attack than questing if you're just looking for extra stats, and there are plenty of options there.

The more interesting case however tends to be considering the abilities of the allies. Now a lot of allies won't get much use of their ability in a Sneak Attack because the benefit of a lot of ally abilities is that they're repeatable, which doesn't apply if they're only in play for the one phase. There are three types of ability which tend to be particularly friendly to Sneak Attack - action advantage, enters play abilities, and discard abilities (or other means of leaving play):

I should also mention Faramir, who doesn't fit any of the above categories but can still be well worth a Sneak Attack because his ability is so potent for the amount of it can add to your questing, and that after staging.

As I said, Sneak Attack is often only considered only in the context of Gandalf, and admittedly Sneak Attack Gandalf is one of the oldest and still one of the most powerful combos in the game. In some ways I wish the two didn't synergise as well as they do, because then Sneak Attack might be appreciated more for the other options it offers, but even with Gandalf in the mix, you should always bear in mind the many, many other uses of Sneak Attack, including but not limited to the ones I've brought up here - and Sneak Attack is also the sort of card which once you've put it in your deck for a specific reason may then end up being used for a different reason in an emergency, and it can really be a game-saver under those conditions. Flexibility really not to be dismissed.

This is my first card review. I plan to add a few more over the course of my time playing LOTR LCG. I have been playing through the game progressively up to Treachery of Rhudaur (excluding Saga), and am just now starting to see the wondrous deckbuilding variety that is out there. This is my first card to review because, up until now, I have used this little beaut in just about every one of my decks. This card, paired with Gandalf, allows for a ton of flexibility. I have often included Born Aloft in my decks to milk Gandalf's value for all I can.

Some other strong allies I have used with Sneak Attack are Beorn and Elrond.

However, I feel like it's time to try other cards and stop relying so heavily on the same mechanic.

FINAL THOUGHTS: This card (paired with Gandalf) is probably the most powerful play in the game in my experience, but maybe newer players should push themselves to try and succeed without it and enjoy the wide variety of options this game offers.

Well here it is the card to rule them all... Best working combo in the whole game is using sneak attack to splash Gandalf at a massive discount into play. Works quite well with ally Faramir too in my opinion

Ifingolis 3
It works well with many allies, especially Beorn, not just Faramir and Gandalf. — Wandalf the Gizzard 1963 6/1/17
0

This is must have card which can make great combo with any ally in the game and in any possible phase of the game. Also this card is the reason why songs exist. There is several similar cards in different faction as Born Aloft for example, but all of them have more restriction then this one. There Really the one to rule them all. Artwork is fine. Verdict: 5/5.