At the end of the round, discard Elrond from play.

Response: After Elrond enters play, choose one: heal all damage on a hero, discard a Condition attachment, or each player draws 1 card. 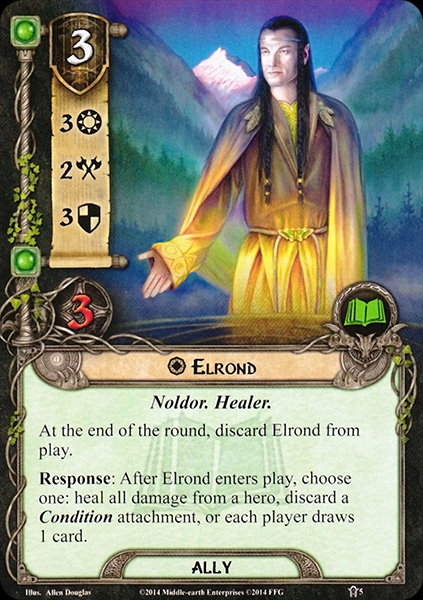 I find a hard time finding a use for this card unless I have a lot of ally readying. Sure 3 defense with 3 health is great. 3 resources is reasonable for that, but then you only get it once. Same with the 3 willpower, although that's rarer for Lore.

If I want to heal lots of damage from a hero, there are other options (Lembas in particular if you have elves, then you get action advantage. If I want to discard a condition I'd rather play Miner of the Iron Hills personally, saving the resource and getting a permanent chump blocker. If I want to draw cards there are obviously better options in Lore, although not always both players, Deep Knowledge is great but sometimes you don't want the threat.

I guess the only argument in favor is the flexibility, similar to Core Gandalf. Although he has more powerful selections and can be played with any resource type. If you're building a One Deck maybe you would include this over those other cards, but I'm running most of those in my lore decks anyway.

frozen 83
Works well with hero Galadriel as you can quest without exhausting and use his defence — WolfOfWinter 1 6/27/21
I find that Elrond with Lothiriel is AWESOME (shares Noble trait). You basically gain a 3 willpower boost, a full healing or condition discard or card draw. And this for free... You even put it back in your deck (and get a card draw with hord of the mark) . Isn't he usefull ? ;) — psykro 1 7/22/21
Huh. That's a great idea psykro — GreenWizard 268 7/22/21
I hate to be the bearer of bad news but unfortunately this version doesn’t have the noble trait…that said, if you through elf friend on her….good times to be had by all. — SubwayTolkien 119 7/23/21
How'd I miss that? — GreenWizard 268 7/23/21