"His knowledge is deep, but his pride has grown with it..." Gandalf, The Fellowship of the Ring
Titus Lunter 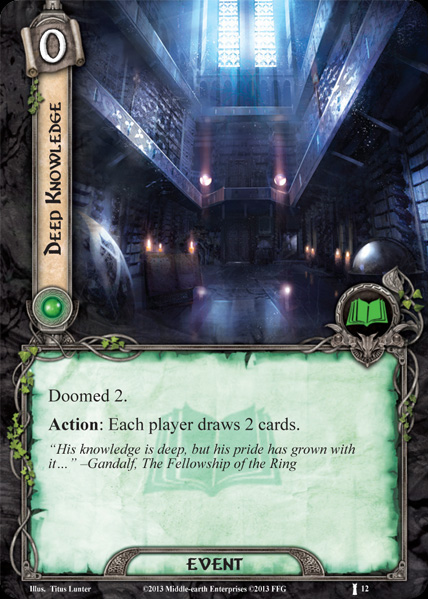 This is absolutely the best of the Doomed player cards. For one thing of course card draw is the most crucial and powerful effect in the game, and for another the cost is easily manageable. Everyone gets 2 threat, everyone gets 2 cards. When Voice of Isengard was originally released I had a bit of a knee-jerk negative reaction to the Doomed player cards, but one more mature reflection I've come around and now it's exceedingly rare for me to build a deck with that doesn't include Deep Knowledge, just like Daeron's Runes. It's pretty hard to justify omitting it unless you're really concerned about your threat. And even then, I might well still use it because the extra cards you draw make you that much more likely to find whatever threat reduction you have.

I've commented elsewhere that the real power of Doomed cards lies in either accelerating the early-game, when resources are scarce and threat is low; or in providing benefits which other cards cannot. Obviously this is not the latter as a wide variety of other effects exist which draw cards, but it is to my mind the archetypal defining case of the former. A fair few times I've had issues because after paying 1 resource for Mithrandir's Advice I can no longer afford to play the useful cards I drew from its effect, but Deep Knowledge being free in terms of resources doesn't have that problem; and given that I'm sometimes reluctant to discard anything from my hand, plus the fact it affects everyone in multiplayer, I tend to even prefer this card to Daeron's Runes (though I'm liable to run both). That multiplayer benefit can be very significant as it really helps out decks which don't have such strong card draw of their own, but really gets bonkers when they do, and when perhaps multiple decks are using this card. Because then each draw effect gives some chance that someone will draw another draw effect, either for themself or for everyone (such as another Deep Knowledge or Campfire Tales), which in turn can draw into more draw, and so on and everyone ends up with a bunch of useful options for what cards to play that round.

As I said, I put this card into almost every deck I build. The only definite exceptions are if I'm specifically building for one of the Dunland quests fro the Ring-maker cycle, if I'm wanting to make use of Secrecy, and if I'm playing a quest which may have a significant engagement cost early on which I want to stay below (Such as 30 for the Hill Troll in Journey Down the Anduin or Murzag in The Morgul Vale), and even then it obviously depends on the starting threat of my deck(s). Otherwise, pretty much always use this, it's just incredibly good.

Warden of Arnor 5145
Unless you're playing in a quest where Threat is a concern (something along Trouble in Tharbad - though I'd argue even that quest is safe) there is no reason to exclude this card in a multiplayer game. Even when I'm hoping to keep my threat low with a Hobbit deck, I'm not upset if another player throws this down. — SecondhandTook 531 12/28/16