Miner of the Iron Hills

Response: After Miner of the Iron Hills enters play, choose and discard 1 Condition attachment from play.

...while the four dwarves sat around the table, and talked about mines and gold and troubles with goblins...
The Hobbit
Loren Fetterman 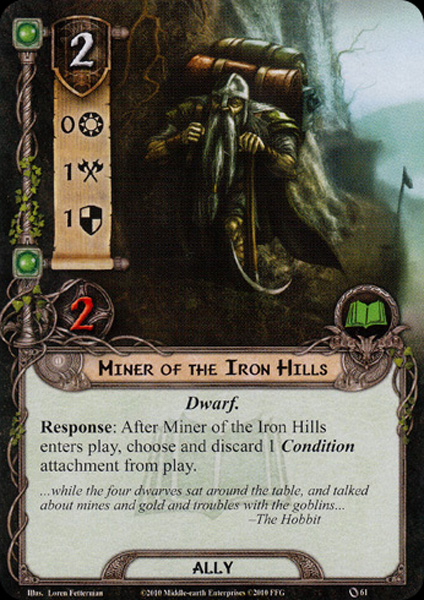 Miner is usually used mostly for his ability to remove condition attachments, no doubt about that. It's really helpful ability which can from time to time win game for you. But even if we will ignore that fact, I actually think he still good even without it. If you take him as usual chomp, for the price of two he still gives you 1 and got 2 hitpoints and 1, so he can survive minor attack. I don't see any reason, why he would be worse then Guard of the Citadel or Gondorian Spearman for example, which cost the same. And with his dwarf trait in combination with Dáin Ironfoot he even become better for the price. Solid ally with cool ability and nice dark artwork. Verdict: 4/5.

A pretty crap ally with a niche ability. Has the distinction of being one of only four cards that currently remove conditions, and if the quest doesn't have conditions, at least he's still a body. Put him in your deck for Conflict at the Carrock, but otherwise you'll probably want to leave him in the box. Why do you need a miner to pull someone out of a sack anyway??

For the record, the alternatives:

Elrond: Expensive, have to give up potential card draw for the condition removal, which hurts more in multiplayer. Good card no matter what quest you're playing.

Athelas: Requires a matching character and exhausts them. The non-condition healing effect can be ok in general games.

Power of Orthanc: Even more niche than the Miner. Better as a silver bullet if a particular quest is really condition-heavy. The Doomed 2 will ruin you in Carrock, though.

NoSoup4you 752
I wouldn't call him a &quot;crap&quot; ally. He does have the correct stats/cost ratio, and the two hit points are nice. Also has the dwarf trait, which means he keys on one of the most powerful synergies in the game as well. All this in addition to being one of four cards to tackle the ever more nasty condition treacheries, I'd say he's a pretty solid ally.... especially coming from the core days where the allies tended to be overcosted and not so great. — MDuckworth83 3127 9/8/16
This is actually a pretty good ally. Condition removal can win some quests for you, and if you're not playing those, you don't have to include the miner. — Wandalf the Gizzard 1997 6/23/17