Action: Each player may choose and discard a Condition attachment from play.

"But Saruman has long studied the arts of the Enemy himself, and thus we have often been able to forestall him." Gandalf, The Fellowship of the Ring
Cristi Balanescu

The Voice of Isengard #14. Spirit. 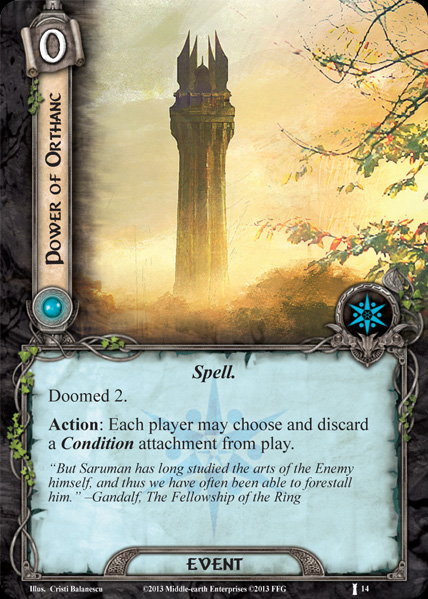 Most people overlook this card. However, I like it quite a lot. First, it is the only Condition removal in Spirit. While that may not seem like a huge deal, it gives Spirit access to the three main types of encounter cancelation: When Revealed, Shadow, and Condition. In addition, I would argue that Power of Orthanc is the best out of the condition removal. While Bulwark of the West shares Power of Orthanc's ability to be cast during the quest phase, it requires an ally. All of the Lore options are restrictive. Miner of the Iron Hills costs two and can only be played the next turn. Elrond offers other options but he suffers worse than the miner. Athelas is good but it is trait specific. In contrast, Power of Orthanc costs nothing, can be played at any time, and only requires you to be able to raise your threat. Every mediocre deck should be able to raise its threat, so this cost is effective non-existent. Basically, you are replacing a condition treachery with an encounter card with Doomed 2 that has no effects. That is fantastic! This card should be in the sideboard of all Spirit decks! I haven't even mentioned its synergy with Saruman or his staff.