Combat Action: Discard Grimbold to choose an enemy engaged with a player. That enemy cannot attack that player this phase.

Grimbold's men turned aside and passed round to a great gap in the wall further eastward.
The Return of the King
Lucas Durham

The Flame of the West #4. Tactics. 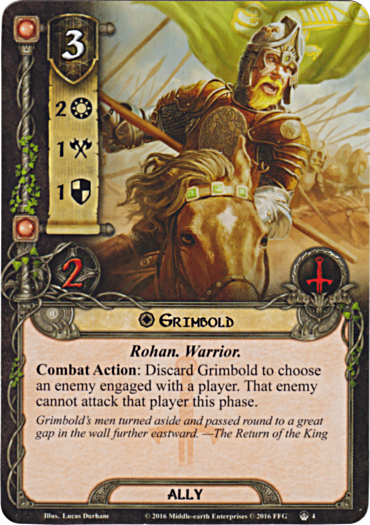 Grimbold is is quite an anomaly for tactics, but perhaps not so much an anomaly for Rohan. Like any Rohan character, he is especially good when you are running his king, Théoden, along with him. Let's take a bit of a closer look.

He actually has plenty of uses making quite versatile. Sure, his 3 cost is a bit high if you plan on discarding him right away with his ability. But again, when running Theoden you can pretty much assume his cost as 2 resources. Considering his spread of stats he suddenly becomes very good value - even if you decide not to run Spirit Theoden. His 1 attack and 1 defense can help in some planned cases. Even his 2 HP is going to help with direct damage fro the encounter deck. Of course, we know his true stat value is in his two WP. I mean, 2 WP in the tactics sphere? Very good.

So, we know Grimbold works in your favor in terms of stats and cost. If we take a look at his ability he gets even better. This guy has a built in Feint. In my opinion he is the best of both worlds for tactics. Three actually. That is, great questing, great combat utility, and low cost with his king present. We also anticipate him leaving play regularly as he is Rohan. A Rohan deck usually has to plan for this anyways, so his ability is usually not a drawback at all. Especially when you consider cards like Éomer, Horn of the Mark, Gamling, Gúthwinë or even good 'ol Valiant Sacrifice. You get the idea, he sacrafices himself often and is okay with it.

Even without Spirit Theoden, Grimbold is a great quester and is a great way to mitigate combat threats. Running mono tactics running thematic Rohan is not common (though I was crazy enough to try it) and therefore you are always going to have access to leadership and spirit spheres and both have ways to recur Rohan allies. If you like having repeatable Feints without Hero Háma, Grimbold is your man.

Heck, if you do not run Rohan at all his warrior trait is value all on its own. Pair him with Prince Imrahil for a quick attack and Feint if you want. It works well.

I think that pretty much sums it up. And if it hasn't I'll leave you with this: play him!