Response: After attached hero is declared as an attacker, exhaust Gúthwinë to give that hero +2 for this attack. If this attack destroys an enemy, return a Rohan ally from your discard pile to your hand.

The Mountain of Fire #11. Leadership. 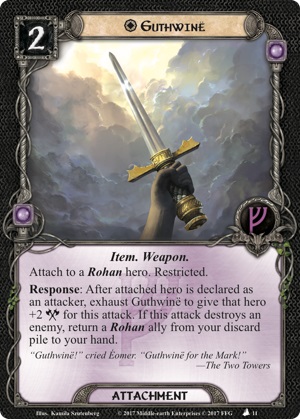 There are only 7 unique weapons in the game: Herugrim, Glamdring, Sting, Orcrist, Durin's Axe, Sword of Morthond, and Gúthwinë.

The question is, is Guthwinë powerful enough to include in a deck?

Let's look at sphere first. There are six weapons. Really only five because Sword of Morthond has nothing to do with attack or combat. 4 of them require certain traits. Sword of Númenor, Haradrim Spear, Gúthwinë, and the newly spoiled Valiant Sword all require a hero or character with a certain trait. Orcrist does not, but it is guarded. Guthwinë provides 2, but only once each round. Sword of Númenor, Valiant Sword and Haradrim Spear provide one constantly, with an additional ability.

Next, let's look at trait. Gúthwinë can only go on a Rohan hero. So is it objectively better than other Rohan weapons? Spear of the Mark, Dagger of Westernesse, Firefoot, Herugrim and others are all good. Only Guthwinë requires exhausting for the attack boost.

Most of the time, having restricted slots filled with attachments that are always applicable is more desirable. But Guthwine has one shining quality that holds it above others. If the attack destroys an enemy, Guthwine returns a Rohan ally from the discard pile to hand. This is so powerful, and objectively better than Gamling's ability. This combos particularly well with Elfhelm, and Éomund. The Eomund combo is especially entertaining, because it allows you to quest everyone except him, chump him, and then voila! Everyone is ready again. Then, use Guthwine to return him to hand and do it again!

Gúthwinë as a whole is a very useful weapon, if you have a spare restricted slot for it.