Reduce the cost to play Herugrim on Théoden by 1.

Response: After attached hero is declared as an attacker, exhaust Herugrim to add attached hero's to its for this attack.

The Treason of Saruman #10. Spirit. 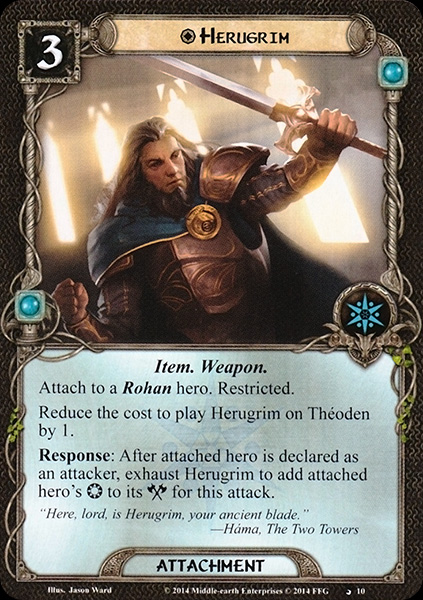 I have a love/hate relationship with this card. I love it because it is brilliant at dealing with bosses. I love it because it doesn't say 'printed ', so you can boost it to ridiculous strength if you have a lot of boosting attachments (check out my song deck using Bilbo Baggins and Fireside Song in combination with Herugrim and Nor am I a Stranger: ringsdb.com.) I love it because it turns Éowyn from solely a quester to one of the strongest attackers. I love that it belongs to the sphere as the only other weapon in this sphere is Mirkwood Long-knife, which has limited potential.

But even after all this, I equally hate it. I hate that it costs 3 resources (okay, 2 on Theoden but big whoop). No other weapon in the game costs this much - admittedly, no other weapon is arguably as good as Herugrim at dealing with tough enemies but that's the problem - it is limited to just one big attack each round and it is this that really bugs me about this card. By comparison, Gondorian Fire is free to play and with the same level of deckbuilding around it can get up to the same sort of levels of strength, if not more, but it boosts your hero's for the entire combat phase, so you can literally burn through every tough enemy in one fell swoop if you have enough readying, whereas Herugrim only allows you to hack down 1 lousy opponent and what's more because you exhaust it you can't even trigger cards like Foe-hammer or Goblin-cleaver with it. I feel like if you are going to exhaust Herugrim, its effect should at least last til the end of the phase. The other thing is because it only boosts your during an attack you can't use it to boost a hero's for battle questing, whereas the '0 cost' Gondorian Fire can be used to boost a hero's attack in any phase and is not limited to attacks.

I think this card should read 'Action: exhaust Herugrum to add attached hero's to its until the end of the phase' or 'Response: When attached hero attacks an enemy, add its to its (limit once per phase).' The former would allow the hero to make multiple high-strength attacks and help with battle-questing but at the expense of being able to exhaust the weapon to trigger cards like Foe-hammer and the latter would allow the use of said cards but mean that you'd have to do some extra planning to get extra attacks out of it. Even with these changes, I would say the cost of the card should be 2 (or 1 for Theoden).