The first player draws 1 additional card in the resource phase.

"Well, my dear fellow," said Bilbo, "now you've heard the news, can't you spare me a moment? I want your help in something urgent."
The Fellowship of the Ring
Tony Foti 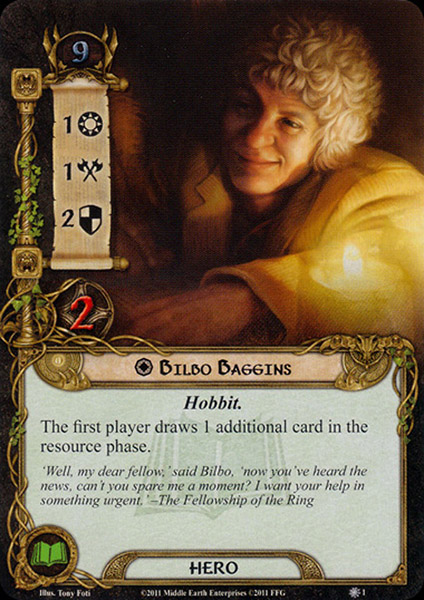 Bilbo is, without a doubt, a terrible hero.

I know, I know, build him up with half a dozen attachments and he's good- but any hero is good if you do that. He literally has no good stats, which means all of his usefulness comes from the attachments. That means if you attached those cards to a hero that is already good at that thing, they're going to be better than Bilbo every time.

The usual advice is to build him up as a defender with cards like Protector of Lórien and A Burning Brand - but in the same sphere and for less threat (yep, actually less threat) I could have Denethor as a defender, who has +1 and . Bilbo will have to ditch a card to Protector every turn just to have the same defence as Denethor starts with, and he's more likely to die if you mess up. Suddenly the extra draw for Bilbo doesn't look so great.

If you want card draw and a hobbit, the obvious choice is Pippin at just 2/3 the threat cost. He'll most likely draw you more cards over the game anyway and you don't need to build him up so much, as the obvious place for him is questing.

The big issue with Bilbo though is opportunity cost. The time you really need your heroes to step up is early, before your board state is very advanced. Bilbo is hopeless then; he's not built up yet (it will probably take several turns to get him to "ok") so you are basically down one hero. He works against the hobbit theme of low-threat turtling to get set up, because his threat is so high. The passive +1 card is a trap - he'll use early card draw and resources just to get him to the level of other starting heroes, meaning that he is a net negative in both cards and resources.

I think Bilbo suffered from coming out so early in the game's development, and was just a complete miscalculation by the game's designers. If he came out now, I think he'd be only 6 threat at most (I personally think he should be 5). That may seem extreme, but his one stat higher than 1 is , and that is the one stat where it isn't very helpful to have a value of 2- the mechanics of defence basically mean that <3 often might as well be 0. His passive draw is not helpful when you need several cards to get to "break even" point, and you don't even get the draw yourself every turn.

Really, the only reason to use Bilbo is if you want to handicap yourself. I rate him as the worst hero in the game, and by some margin. The only question to me is, are you better off having only two heroes rather than taking Bilbo? And that is a pretty sad indictment.

Schrodingers Hat 45
I don't think it's fair to judge the first hero we got in an AP against today's standards and pool. Bilbo is certainly overpriced as a result of a miscalculation by the developers (and yes, I think they should errata him to 6 threat). Back in his days, there were just 2 hobbits available (him and then Frodo), and he was the one with the amazing Fast Hitch on sphere. Likewise, back in the days there was Beravor for reliable card draw and little more, there was no Heed the dream, no Daeron's runes, etc., so Bilbo was a very nice addition to Mithrandir's advice and the terrible Wealth of Lorien in order to draw cards. Lore Pippin came along with a bunch of hobbit cards and it's hard to make a case for Bilbo when competing against him, but even nowadays I don't think he's strictly worse than Spirit Pippin or Fatty Bolger. Some heroes were revitalized afterwards, like Dunhere, but Bilbo was better than him back then. I don't think he's strictly worse than other heroes like Lore Glorfindel, Dori, Idraen or Halbarad, because he's ability is more interesting and his main virtue. My two cents! — Freeman 3 11/26/18
Well, if I was going to review a card “as it was when released” that would be a different review entirely. This is a review of a card as of the moment when I wrote it. As far as the other heroes you’ve mentioned, I would (and have) use all of them well before Bilbo. Interestingly though, I think a newly announced card (The Shirefolk) may rehabilitate Bilbo somewhat- I may be feeling differently about him in 6 months :) — Schrodingers Hat 45 12/8/18
9

I think Bilbo can be one of the most powerful Hobbit heroes, if you use him correctly.

People can't stand Bilbo because of his 9 threat cost and terrible stats, and that is very understandable, but if you have him in a one-player Hobbit deck he can be very useful. Hobbits rely on their deck, and drawing 2 cards a round can, in some cases, be crucial. Plus, 9 threat won't be a problem if your other heroes have a total of 12-15, and his 2 defense is only beaten by Tom Cotton, which is really good for those weak Hobbits. There is a ton of cards you can give him, personally I would give him Hobbit Cloak, A Burning Brand, Protector of Lórien, and...

Thorongil. This is an epic card to put on Bilbo if you are using him in a normal deck and want questing power. He can easily quest 3-5, and deal damage to enemies as well.

There are instances where you can use him in a normal deck.

Say you are playing with Aragorn, Éowyn and Bilbo. That's a total threat of 30, which isn't bad at all, and to start you quest with Éowyn and Aragorn, readying Aragorn after he quests. Soon, though, you have Éowyn defending with Golden Shield, and Bilbo questing with boosters and Thorongil. Plus, it shouldn't take too long to get those attachments because of Bilbo's effect.

Overall, I would give Bilbo a 6/10 score, mostly due to his effinciency in Hobbit decks. He is definetly not one of the worst heroes in the game, far from it, way better than Pippin, Bombur or Dori (Sadly).

nelloianiro 935
You are kinda relying on TacticBilbo to much for this to be ta good review of LoreBilbo... — Truck 1261 5/12/21
Truck I see your point, but here's why I did what I did. — nelloianiro 935 5/14/21
Sorry, I accidently hit enter. The reason I did what I did was because both Bilbos have amazing Thorongil potential, I would rather do a review on the less popular of the two. With Bilbo's amazing card draw, you should be able to get out Thorongil fairly quick. I see what you mean, but I was trying to show what Bilbo could be like at his full potential. — nelloianiro 935 5/14/21
8

A really bad Hero, unless you desperately need (more) card draw (and highly questionable even then)

Not gonna lie, Bilbo Baggins is imo a strong contender for the title "worst hero in the game". Insanely overpriced at 9 for his absolutely horrible stats.

How bad he is is actually somewhat showcased by Beravor, a card that comes in the core set, that is, for all (relevant) intents and purposes a better hero.

For just 1 more Beravor can both draw your table 2 cards per turn and choose the drawing player.

Plus her 2 2 2 4 make her a better emergency... well everything than Bilbo Baggins.

The only edge Bilbo has over Beravor, is that he doesn't need to exhaust to draw cards so he is free to...?

To do what exactly is my question? Quest for 1 paltry ? Attack for equally paltry 1 ? Defend with his 2 and 2 ?

Just questing puts poor little Bilbo Baggins in very serious danger of dying due to damage from treacheries from the encounter deck (and the cycle Bilbo Baggins appears in already contains such "fine" Treacheries like Necromancer's Reach, Evil Storm and Rockslide). I don't think i really need to elaborate, why defending seems a surefire way for Desaster... Attacking is mostly fine but do you really need exactly 1 more ?

If you need card draw (and you decided you do, why else include Bilbo Baggins?) Is this 1 (or if quest permits it 1 ) worth drawing 1 less card and not even being able to choose who it goes to?

In short, don't play Bilbo Baggins unless you desperately need card draw and you (or someone else at the table) already plays Beravor (and even then strongly consider if the 1 extra card per round is really worth basically getting an almost useless hero).

Archol 103
I feel that Bilbo gets a bad rep for being too expensive and because of Beravor being vastly superior to him in all areas for 1 additional cost. However, I think he is actually better than Beravor for a number of reasons. Firstly, his ability is passive. Beravor on the other hand requires you to exhaust her in order to use her ability, rendering her other stats useless without any consistent readying effect. With only Wingfoot available in-sphere to ready her, she only really needs her willpower stat if you are going to use her ability each round. Secondly, Bilbo has access to some very powerful cards due to his hobbit trait. Fast hitch for cheap repeatable readying and with a burning brand, Boots of Erebor and protector of lorien on him, he becomes a very capable defender. A Good Meal makes some of those expensive Lore cards far more attractive. Lorien's wealth, Beorn's Hospitality, hell; even Gandalf's Search becomes a decent card after a Good Meal! Admittedly, in multiplayer his ability is less useful than Beravor's but with the Ranger/Hobbit synergy now available, the question shouldn't be whether to use Bilbo or Beravor but why wouldn't you use both of them together! — Aurion 784 9/19/18
Totaly agree with Aurion — matrosh 461 9/19/18
Bilbos stats might be worse but at least you get to use his — SamthemanGamgee 462 11/24/18
6

I think an errata with "Setup: reduce your threat by 1 for each other player in the game" (that would make him a 6-cost heros in a 4-player fellowship) could make him shine more, and open more Secrecy builds.

Bilbo maybe won't be appreciated in multiplayer games, however in solo game, he is really worth to be played. His threat is maybe high, but still worth for two cards per round without any exhaust. His stats ain't good enough for you? No problem. Give him Protector of Lórien for start and Fast Hitch and A Burning Brand. Now he become quite versatile quester/defender and with the amount of incoming cards, no problem with discard. Or you can use Hobbit Cloak. Not enough hit points? Well, these Boots from Erebor were made like for him. And if you'll feed him with Good Meal he will give you nice discount for several event cards like Beorn's Hospitality, Lórien's Wealth, Out of the Wild, Risk Some Light and so on. I think he even shines between his other versions, where saga Bilbos look more epic, but are not playable outside saga content, and ally Bilbo Baggins is simply not so versatile as his old hero version. I also like the fairy-tale artwork reminding me the old Hobbit book, where all this stories started. Verdict: 4/5.

Bilbo Baggins is rejected mostly due to his insanely high threat cost. But an extra card per round is inarguably powerful and he can still take an action (though granted, that won't be much). He has good synergy with Protector of Lorien for hand pruning. He has very good potential as a Voltron deck target due to in-sphere access to a Burning Brand and Fast Hitch. With Steward, Blood, and Fire,and Lay, you'll want the songs to play them; which warrants Fireside Song. He's got a good deal more to offer than any of you know, including himself.