If each hero you control has the Hobbit trait, Pippin gains: "Response: After an enemy engages you, raise your threat by 3 to return it to the staging area. Until the end of the round, that enemy cannot engage you."

"There must be someone with intelligence in the party." The Fellowship of the Ring
Magali Villeneuve 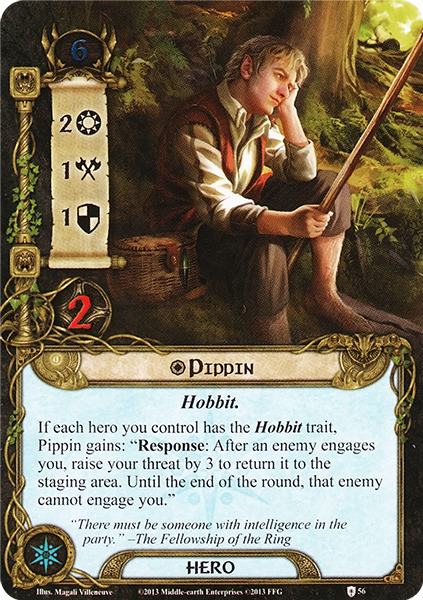 Spirit Pippin is one of the most powerful cards in the game. Period. If you don't use him in at least half of the decks you build, you're making a mistake, as he is incredibly powerful and versatile. Allow me to show you why.

First of all, his base statline is very powerful. While the 6 threat cost can be kind of high, you gain great stats in exchange for this. His 2 willpower is okay, but his high values of attack and defense are where his true strength lies. With his one attack, he can almost single-handedly destroy the average enemies in the game, and his one defense is also very useful for blocking the numerous foes that will come off of the encounter deck. In fact, he has such great stats that you will find yourself having a hard time figuring out what to do with him each round, so Fast Hitch is a good option for an attachment so you can get multiple actions out of him. However, his greatest strength lies not in his stats but in his ability.

His ability allows you to push an enemy back into the staging area once it engages you, while giving you the added bonus of increasing your threat by 3. This synergizes very well with his combat-focused statline, as having extra attack and defense when you will be fighting literally nothing is a great boon. Also, his stipulation that the ability only works with Hobbits allows him to fit into a wide variety of decks than he would normally not be able to. The threat raise of 3 also works quite well with his ability, as it allows you to use it more often. The more and more you use his ability, the more you end up using it. The ability to return an enemy to the staging area and let it contribute its is such a powerful one I expect it to receive an errata to limit the threat raise to one so that you cannot abuse it so easily by engaging more enemies and pushing them back, because your threat is rising over their high engagement costs. The added threat to the staging area from the enemies Pippin is pushing back can also lead to questing unsuccessfully, though, which raises the Pippin player's threat anyway! I suppose we will just have to accept that the card is brokenly powerful.

Final verdict: Ultra-powerful card that can go in any deck, and one that should get errata'd but won't.

emorlecallor 1187
True, this guy does get a lot of hate, but he's still pretty useful in a hobbit deck when playing the saga expansions (like The Black Riders and the Road Darkens) when you need a spirit hobbit instead of a lore one and you can't use Frodo. — emart40x 29 8/5/16
Yes, but even then there's still Merry, and Fatty too. I actually am an advocate of Fatty, as I believe that having a repeatable Radagast's Cunning can be useful, especially with all of the threat reduction in today's card pool. — emorlecallor 1187 8/6/16
lol — snaggrriss 1 8/9/16
Hahahahaha this is incredible! I concur so OP! I throw Nor Am I a Stranger and Elf-Friend on him so he gets even more words that mean nothing on his card! Try this sick combo if you can handle it! — Christian_Medic 869 4/14/20
12

So, point one, poor design. He only has an ability if all your heroes are Hobbits. That seriously pigeonholes you into only certain particular types of deck. Point two, he's not a very good match for the type of deck he pigeonholes you into. Primary Hobbit strategy involves gaining benefits for staying below enemy engagement costs. Pippin's only ability is to push the enemies away again after you engage them, and drive your threat up by doing so. Ironically his best synergy with other Hobbit cards would be with his sphere alter ego, since then you could engage an enemy to draw a card and then push it away again if you couldn't deal with it. Now I'll grant you that the Hobbits do seem to have more of a theme of raising threat for benefits, and then probably lowering it again with a variety of events and drawing cards with Hobbit Pipes. But compare the effects - Frodo Baggins cancels damage, making him an incredibly potent defensive option. Fatty Bolger is a repeatable Radagast's Cunning. Pippin is a repeatable A Light in the Dark, only more limited, because he can only trigger right at the point the enemy engages you in the first place. I suppose you could argue he could synergise with Fatty since Fatty can then cancel the threat of the enemy as you continue to quest past it, but then he can't cancel the threat of a different enemy, and that's a lot of threat you're eating for this, such that keeping your threat at manageable levels is likely to take considerably more effort and deckspace than just including options to let you deal with the enemies. He has no real synergy with Frodo, because what's the use of a defensive solution when you never have to defend? Nor does he synergise with the other Hobbit-based cards released in the same pack as him, because Small Target and Hobbit-sense will only have any effect if you are actually engaged with enemies, at which point Pippin has missed his chance (If it were an action rather than a response maybe you could use the events to tie up some enemies for a while before pushing them back when you run out of tricks, but it is a response, so no dice there).

The only things Pippin does have obvious synergy with are staging area attacks - Dúnhere, Forth Eorlingas! or Great Yew Bow. You could also say Haldir of Lórien, but if Haldir is powered up enough to one-shot enemies it doesn't matter if they're in the staging area or engaged with you. Of course you have to bear in mind though that his ability prevents the enemy engaging him again that round, but says nothing about anyone else, so he doesn't alleviate the need for those strategies to either maintain a very low threat or mess around with engagement checks - you could perhaps have the Pippin deck set up Wandering Took/Song of Eärendil to drop the other deck(s) down so no eneimes will engage anyone else, but then once again you're expending a lot of effort for a dubious payoff. The other key point to which I have obliquely alluded is of course that all these effects have to be in other decks as they don't work with Hobbits (unless you really want to try and stick Nor am I a Stranger on your Hobbit heroes and then play Forth Eorlingas). So once, again, Pippin does not synergise with his trait despite being forced to only work with it.

In slight mitigation, I will say that a Pippin deck is not wholly useless. I've played a deck using Pippin/Frodo/Fatty, and knowing for a fact you will never engage an enemy does leave you free to focus purely on questing and threat reduction, trusting your team-mates to manage the rest. On the other hand, since your threat is so low, few enemies will engage you anyway, and if you're already trusting your team-mates to handle all the combat for you, why not have them include a little Ranged and Sentinel for the few low engagement cost enemies who slip through, and run Merry instead?

To reiterate: Ability is too restrictive for a marginal benefit, only works within his trait but doesn't synergise with it, worst hero in the game.

Warden of Arnor 5207
In Spirit Pippin's defense, I will say that at least he has three fewer threat than Dwalin. But then again, Dwalin is a dwarf and is therefore ineligible for &quot;worst hero&quot; consideration owing solely to the existence of Dáin. — Some Sort 3195 5/11/16
Thank you. He's worse than Bombur. — nelloianiro 921 5/3/21
5

With the release of Mountain of Fire, I think Pippin actually adds more value and synergy to hobbit secrecy decks. Tom Cotton allows you to bring in a hobbit ally (without a resource match) after you engage an enemy. Raise the Shire allows you to search for a hobbit ally, but again only after you engage an enemy. So if the Hero line-up is Merry, Pippin and Tom Cotton, Merry can reduce the threat when an enemy comes into play, Raise the Shire can search the deck for Rosie Cotton or other hobbit ally, Tom Cotton can bring in said hobbit ally, and if our lowly hobbits aren't prepared to face said enemy, Pippin can push said enemy back to the staging area. The net gain could be having lower threat and a good ally in play. Depending on the deck, Pippin could still be a better hobbit to use, especially since there are a lot of usable Lore cards in a hobbit secrecy deck, but it does give another option of playing Pippin. Pippin needs more love!!!

bdavis96 93
Cool combo! — Wandalf the Gizzard 1989 8/29/18
Tom Cotton doesn't really combo with Pippin, since to benefit from Tom the enemy needs to still be there in the Planning phase, whereas Pippin can only trigger immediately after engaging. — Warden of Arnor 5207 8/31/18
What I will add is that SpPippin does synergize with SpFrodo although still niche...early on when a big enemy might attack and you are going to use Frodo to take it and threat up, SpPippin will limit that threat up to 3. In given situations, he does have a place...so he can’t be the WORST hero, can he? — bdavis96 93 7/13/20