Action: Exhaust Rosie Cotton to choose a Hobbit hero and an attribute (, , ). Add Rosie Cotton's to that hero's chosen attribute until the end of the phase. (Limit once per phase.)

"…take care of yourself, and come straight back as soon as you have settled the ruffians!" The Return of the King
Gabriela Birchal

The Mountain of Fire #5. Leadership. 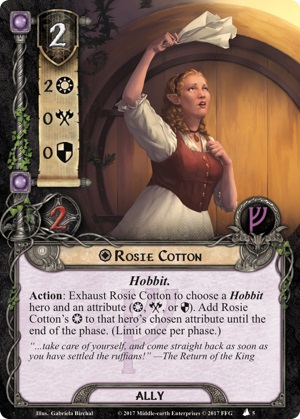 Rosie Cotton is amazing, and an absolute auto-include in Hobbit decks because of the versatility she brings. As a 2 cost 2 ally, she is as wonderfully cost efficient as the best Spirit allies and would fit in any deck even without a Hobbit hero on that alone. Where she shines is due to her ability, and the flexibility it provides players.

Because she can add her willpower to any attribute for a Hobbit hero, she becomes the equivalent of Celebrían's Stone, or Dagger of Westernesse, or Gondorian Shield. Except you get to decide which you need in any given round, and because the ability is an action, you can make that decision after staging so you know exactly which you need. She can also boost a defender after the shadow effect is revealed if there's a nasty attack increase.
In a Hobbit deck that doesn't typically have great defensive stats, sometimes you won't engage enemies even though you want to to proc Pippin and Sam's response, because you can't defend the attack. Rosie's ability enables the defense of some of those early attacks until you can find the Hobbit Cloak. Her ability is also not dependent on threat, so she makes a good backup to the Cloak for low threat enemies, or later in the game where your threat has crept up.

Outside of a dedicated Hobbit deck, I've used her as solely as a boost for Bilbo, where he was present simply for card draw. Would also work reasonably well with Sam in a similar context.

Fast Hitch lets her contribute to questing and combat (note the ability is once per phase). Anything that increases her willpower is great, Wild Stallion, Elrond's Counsel, The Arkenstone, Sword that was Broken are some I've used with regularity.
Note Red Book of Westmarch will only increase her willpower during the quest phase, so won't apply the boost to combat.

For fun and profit, use Sword-thain and then Rosie can benefit from the myriad of willpower boosting effects that only target heroes. Fireside Song, Celebrían's Stone, Song of Hope to name a few. MOTK will work here as well, but in my playing of it I found myself really hurting for actions until the hitches showed up, so overall would rather have her as an ally.