Attached hero gets +1 (+2 instead if attacking an enemy with an engagement cost higher than your threat).

...these blades were forged many long years ago by Men of Westernesse: they were foes of the Dark Lord...
The Fellowship of the Ring
Sara Biddle 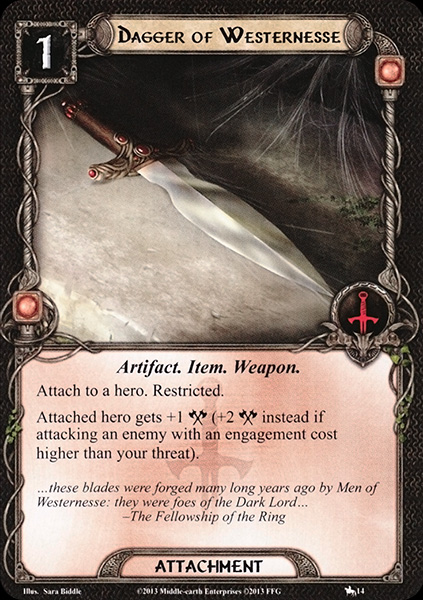 In the as-released progression, this is a card that was long overdue. It's actually crazy to me that tactics for so long didn't have a generally applicable +1 attack boost for 1 cost. Everything prior to this was either trait-specific to dwarves (Dwarven Axe which is generally usable but overpriced for non-dwarves, Dwarrowdelf Axe), elves (Rivendell Blade), ranged elves (Rivendell Bow), or Rohirrim (Spear of the Mark) or only useful against orcs (Blade of Gondolin). But tactics heroes who didn't have the aforementioned traits either needed multi-card combos like Support of the Eagles or out-of-sphere cards like Dúnedain Mark.

There is even additional upside to this card in connection with the Hobbits with whom it was released. The various bonuses for engaging enemies with higher threat that the Hobbits give (and their own low threat cost) make this a no-brainer for Hobbit decks. But the biggest benefit to having this I card is its general usefulness.