Attach to a Hobbit character. Limit 1 per character.

Response: After your threat is reduced by an event card effect, exhaust Hobbit Pipe to draw a card.

But even the Dúnedain of Gondor allow us this credit: Hobbits first put it into pipes. Not even the Wizards first thought of that before we did. The Fellowship of the Ring
Mike Nash 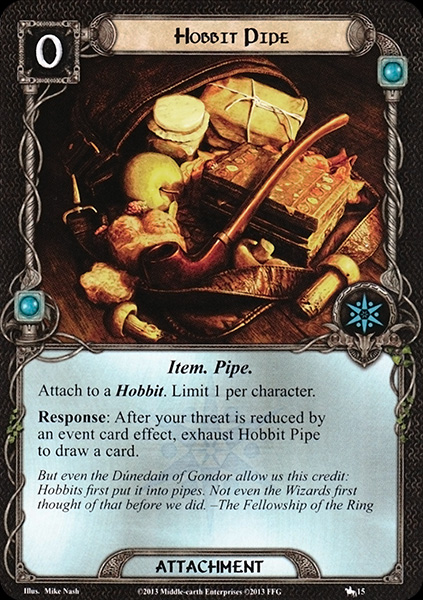 Hobbit Pipe is a card I've felt for a while is under-rated. The big reason for this I think is because it was released alongside Smoke Rings, and because that card didn't look so good on release (it's better now though still a more niche option), a lot of people tarred the Pipe with the same brush. Which is really unfair if you give it a moment's thought. Smoke Rings is dependent on Pipes, but the Hobbit Pipe is not dependent on Smoke Rings.

So to start with, this card is not for every deck. But then very few cards are. You need Hobbits to attach to - although this can include ally Bilbo, who also fetches the Pipe out of your deck. The more significant restriction though is that you need to have threat reduction in the form of events. So if you're getting your threat reduction from Gandalf, Aragorn, Galadriel, Galadriel's Handmaiden or Merry then the Pipe will do nothing for you. Equally many decks may simply not bother with threat reduction, instead working under the assumption that they'll just win the quest before they hit 50. However, if you are in a deck which requires threat reduction and gets it from events such as Elrond's Counsel, The Galadhrim's Greeting, and the like, then the Hobbit Pipe is a great inclusion. The one remaining downside I haven't brought up is that of sequence - you need to draw the Pipe before you draw the threat reduction for it to work, but having Bilbo to fetch the Pipes and simply having numerous threat reduction events gives you decent odds for this.

Consider then - the Hobbit Pipe costs 0, and will cause you to draw a card every time you reduce your threat with an event. Those Elrond's Counsels and Galadhrim's Greetings you wanted to play anyway, but now they've become card draw as well as their other function, and all it cost you is including the Pipe in your deck with a hero to play it on. Or maybe even without a suitable hero and you put it on Bilbo after he fetches it - since he's 2-cost for 2 and 2 hit points including him is not an unreasonable prospect either. Consider as a comparison the fact that people will include the 0-cost We Are Not Idle just to thin their deck; in this light, the Hobbit Pipe seems pretty clearly an upgrade - as soon as you play some threat reduction the Pipe has effectively worked as a copy of We Are Not Idle. Every subsequent threat reduction event is giving you a profit of card draw. If you have at least 6 threat reduction events in your deck (3 Counsels and 3 Greetings) then that's some pretty good draw over the course of the game. If you have more then that probably means you're specifically building around the Pipes, but that's not a bad move in any case because card draw is king, and having that threat reduction means that while you're at it you can also be handily paying for any effects which require you to raise your threat (such as those featured on some of the Hobbit heroes) or just reducing your threat to very low levels allowing you to ignore a lot of combat in favour of a questing/support focus and also to benefit from powerful Secrecy cards.

All in all, the Hobbit Pipe is a very nice option for card draw to just splash into a deck which happens to include threat reduction and Hobbits, or it can become the focus and draw engine of a dedicated Hobbit/threat reduction deck. Both options have much to recommend them.

Easy to overlook, but essentially Love of Tales for card draw. It triggers off of The Galadhrim's Greeting, Elrond's Counsel, Needful to Know, Free to Choose, Renewed Friendship, Island Amid Perils, Keen as Lances, and the obviously-designed-to-go-together Smoke Rings. (Plus Brace of Coneys, for what that's worth.)

Seeing as the first two cards are two of the most common cards in Spirit decks, there's lots of potential for card draw with the Hobbit Pipe, which becomes self-replacing on the first event and a net gain on the second. More importantly, if it is fetched by Bilbo Baggins, then it's providing a net card gain immediately. Really, there's little reason for a deck with Ally Bilbo not to toss in one copy of the Hobbit Pipe just as a deck thinner, if nothing else.

One sneaky aspect of the Hobbit Pipe is that it doesn't have to be attached to heroes. Indeed, I would argue that the ideal target would instead be a Wandering Took. Some rounds you might not have threat-reducing events in hand, in which case the Pipe will typically lie dormant. But that intrepid Took can easily transport the pipe across the table and let a partner benefit from it, reducing the number of rounds where it's not netting a card.

Indeed, with multiple decks playing an army of pipes and Tooks, it's possible to reach a sort of critical mass where one player or another is netting a half-dozen extra cards a round. Which turns into very potent card draw, indeed-- and, moreover, potent card draw that is found outside of Lore! A trio of pipes lets Elrond's Counsel net as many cards as Mithrandir's Advice in a mono-lore deck... while costing one fewer resource, reducing threat by three, and giving a 1-point willpower boost for good measure.

Not bad for a card that costs nothing.