Response: After a Song card is played, exhaust Love of Tales to add 1 resource to attached hero's resource pool.

"I listened because I couldn't help myself, if you know what I mean. Lor bless me, sir, but I do love tales of that sort."
Sam Gamgee, The Fellowship of the Ring
Winona Nelson 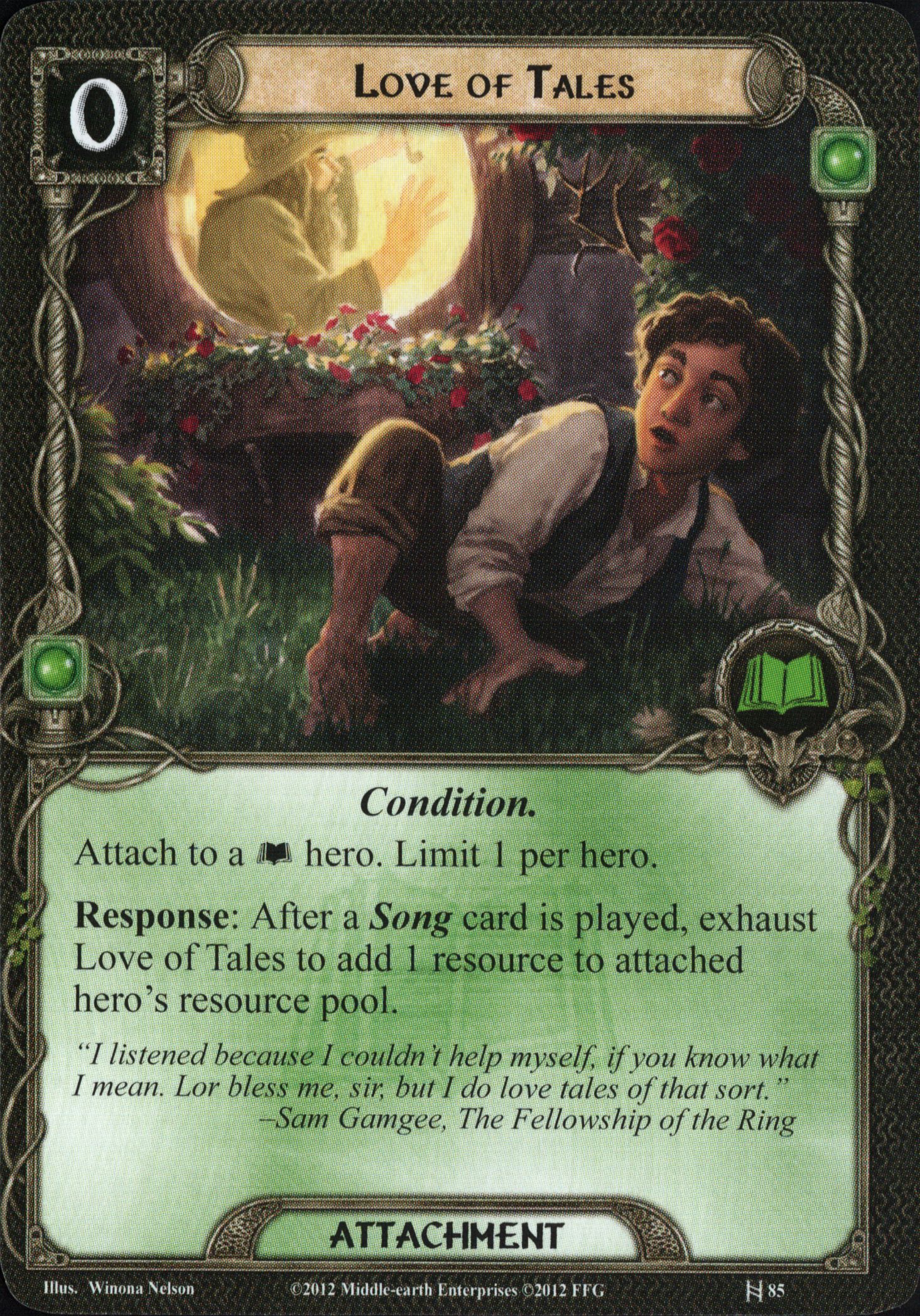 And every other turn made a resource stone;

If a Song was played, he a resource made,

But Songs were hard to come by.

For Songs were hard to come by.

Then up came Stew with his bearing rude

And asked he Love: 'Why, who are you?

You're no card of note or your name I'd know;

You must be binder fodder.

You're a stranger to me but not quite new;

You must be binder fodder.'

Why, once we were close as a hand in glove!

But Caleb was vexed by my ready text,

And to fix it he had me erratad.

He took a red pen to my box of text,

And I was knelt down by errata.'

'No wonder you're here!' Stew said with a sneer,

'Our players have no need for a crippled deer!

If you're not right strong then move right along;

The fans have no need of weaklings.

There exists no room for weak cards here,

And errata makes you but a weakling.'

'For Boromir, true,' says Love back to Stew,

'but there are other players with a different view.

And, though I have zip for the players Pip,

I have plenty for players Bilbo.

I have naught for the others, this fact is true,

But I have plenty to offer Bilbo.'

For Love had repeated what Caleb had sung;

'You can be strong or part of combo long,

But there's also room for thematic.

There was a need for those cards that had the game outgunned,

But there was also a need for thematic.

Stew bid Love 'good day' and then ran away,

Lest Caleb decide his text, too, to slay;

But Love don't care, for he didn't stay there,

For a Bilbo player found him.

Pound him! Ground him!

He was taken on out, The Long Dark to play,

For a Bilbo player had found him.

I find that this card can be extremely useful in songs based decks, obviously. It basically lets you play the first song you played this turn for 1 less resource, but that is only one thing that is great about. I'm sure most players overlook this, but it can be used to shift around resources. You could make a deck based around piling resources on a hero for effects like Blood of Númenor, Lay of Nimrodel and Gondorian Fire for some fun. An idea I made was a song and pipe deck based around Glóin with the other heroes being Beravor and Pippin. I played a Fireside Song and a bunch of songs on Pippin for some massive , and used Beravor for card draw, since songs and pipes are cheap to play. I also threw a Blood of Númenor and Gondorian Fire on gloin with some readying effects for some fun. For another deck, you could do a similar idea with Bifur and Denethor while giving the noble trait to Bifur for a similar effect.