"And winter comes after autumn." Bifur, The Hobbit
Magali Villeneuve 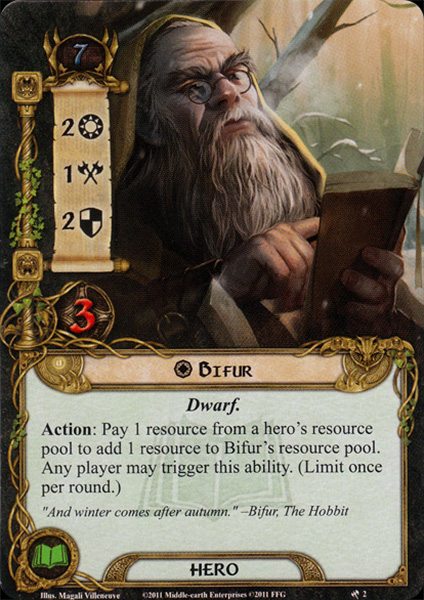 For starters, his stats. He's low threat at 7, and for some inexplicable reason is actually undercosted, possessing 8 total stat points, making him incredibly efficient and cheap. And, continuing his theme of efficiency, his stats are fairly concentrated, 2 making him a decent quester and 2 and 3 meaning that he can take a weak attack or two and not die.

Moving on to his actual text box, the first thing to notice is that he has the Dwarf trait. This is extremely helpful as Boots from Erebor is free and can help increase his survivability while Narvi's Belt looks like it was made for this guy due to his action. And, WOW, that action. Moving around one resource a round doesn't sound like much, but trust me, Bifur's ability is game-changing. The key thing is his sphere, , a sphere either famous or infamous depending on your perspective for having a lack of resource generation, basically limited to Love of Tales and the pseudo resource generation of Gríma. Bifur turns this on its head. He's even better than flat-out resource generation in a way because if you don't need resources you can just choose not to trigger Bifur, whereas the likes of Steward of Gondor have a tendency to pile up Graham's Number worth of resources on one hero while you only draw cards that they can't pay for. Bifur's combination of resource acceleration and resource smoothing solves this problem, allowing you to fairly efficiently redistribute resources to the hero who needs them most at the moment. In addition, because Bifur's ability is a raw action as opposed to a planning action, you can wait until the end of the round to see if you need to use it or not.

Bifur is an insanely flexible hero. His low threat makes it so that he can slot into almost as many decks as Glorfindel, his stats aren't that bad for his threat cost, he grants easy access to 's abundance of card draw effects, and his ability allows you to effectively run either a tri-sphere deck or dual-sphere deck with in the minority as if you had 2 heroes. Overall, Bifur isn't a flashy hero, but he is a solid choice if you need to splash in a deck. Bifur is boring. But who says that boring has to be bad?

He is a really useful, low threat hero that is very easy to use in a deck. He can be used in multiple sphere decks when you need an extra resource. or, in multiplayer, another player could more one of their extra resources over to you if you are in need of one. All in all, Bifur is a great hero and shoud not be overlooked.

FolcoBoffin 249
He often gets the edge over Ori in my Leadership/Lore dwarf decks. He's also great in Silvan decks for access to Unlikely Friendship. — Wandalf the Gizzard 1997 1/11/18