Action: Lower the cost of the next card you play from your hand this round by 1. That card gains Doomed 1. (Limit once per round.)

"Let your counsellor Gríma keep all things till your return – and I pray that we may see it, though no wise man will deem it hopeful." The Two Towers
Nacho Molina

The Voice of Isengard #2. Lore. 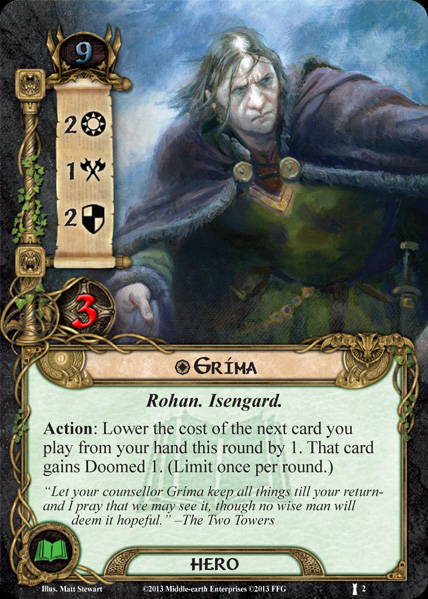 Grima is an interesting hero. A lot of people would say he should only be played in solo, though others might argue uncharitably that those who decry multiplayer Grima are just being babies about threat. I mean, here's the thing about threat - most of the time it doesn't matter. It matters to score, but who cares about score, and even then the number of rounds taken to beat a quest factor further into the score than a little extra threat. It matters to engagement costs, but generally that means there'll be one or two points where you want to be careful about it and then you stop caring again because you're past the engagement costs. It matters if you hit 50, but that's a pretty high bar to reach in general. The vast majority of games you don't even come close to 50 threat.

Now, this isn't an absolute. Excessive Doomed can screw up certain strategies, like Hobbits or Secrecy, but no card works with absolutely everything. By and large a little Doomed isn't going to hurt anyone very much, just avoid the cases where it will. The only argument then is if said Doomed is really worth it for the benefit. Now of course the real problem people have with multiplayer Grima I think is not the Doomed itself, but the fact that the Doomed affects all players while only the player controlling Grima benefits from the cost reduction. It's kind of a valid point, but I'd still be inclined to say it shouldn't be so hard to just suck it up and deal with the few extra threat points, though I will concede that it means Grima gets arguably worse as player count rises. Just one more thing to add to the divide between solo/2 player/3-4 player.

Despite Grima's incredible power, I admit I do still wish there was more synergy for Doomed. You don't need it, you can just include a bunch of cards you wouldn't otherwise be able to afford sensibly, but it'd be nice to have one or two more things that specifically worked well with Grima. The things we do have, for completeness - Orthanc Guard technically, though he's not very good; Isengard Messenger is 2-cost 2 if you trigger Grima consistently, potentially 3 if another source of Doomed happens; and of course the Keys of Orthanc net you (or someone else) a resource for triggering Grima in addition to the one saved by the cost reduction, making it a pretty great deal. I'd like one or two more things like that though, that trigger a benefit when the Doomed keyword goes off.

Final notes on Grima: his stats aren't up to much. Most likely he just quests for 2. 2 and 3 could take a hit in a pinch, and of course being in the sphere you can give him A Burning Brand, maybe Protector of Lórien if you want to go that route. It should be pointed out that his threat cost is in fact 1 point higher than the sum of his stats, and I'd say it's debatable to what extent that's merited, but it shouldn't discourage you too much in my opinion. And one little trick you can pull with Grima (which might help your team-mates in multiplayer to complain less) - his abiility is an action which can be triggered in advance of actually playing the card, but the Doomed doesn't happen until the card is played. So for starters triggering the ability in advance allows you to potentially reduce the cost of a Response event where otherwise you couldn't, lacking an action window, and furthermore this means you can trigger Grima speculatively and then the Doomed won't actually happen if you don't actually play the card. So trigger Grima at the start of the quest phase, and then if need be you can play A Test of Will for free (and Doomed 1), but if you don't have to cancel anything the Doomed won't happen. Note that Grima's ability lasts until the end of the round, so if you play a different event later in the round then the cost reduction and Doomed will apply, so remember that (and don't waste it on a 0-cost event, because then your team-mates will get really annoyed). People can be more accepting of Doomed 1 in exchange for A Test of Will, or Hasty Stroke, or Feint than if you just use it to advance your own board-state, and especially so when the event and Doomed may not actually happen if not needed.

Overall though, Grima is an amazing hero and I think more people should make use of him, both in solo and in multiplayer ignoring the futile complaints of the other people around the table (just don't grief them too much with it).

Deceptively strong in singleplayer. One threat for one resource is a pretty good trade when Doomed only has one threat dial to increase. A very useful hero for breaking through the early game, as his 'resource generation' is great in Lore when you often have a glut of cards and nothing to pay for them with. Often nice even when you don't actually use his ability, as simply having him there can free up a resource that you'd otherwise want to save for events you may or may not even need this round (e.g. A Test of Will). The main advantage against him is his stats being worse than expected for his threat cost, so you have to be sure that you'll need his ability. Overall, a very strong contender for any solo Lore deck (especially without Leadership and other resource generation).

I would go so far as to say he is one of the strongest solo heroes in the game. Still good in multiplayer but you will get some groans about threat raising everyone's dials each round.

But what a strong trade off, for the low cost of one thematic threat raising his poisoned counsels will reduce the cost on ANY sphere of card that you play next. Blanket unconditional cost-reduction is an incredible things. Some examples, being able to play Resourceful, Sword-thain or Treebeard Round 1, in a tri-sphere deck with leadership being able to play Steward of Gondor round 1. In Saga campaigns you can drop a Gandalf Ally any round, even if you start with no resources. Also when compared to other resource-generating characters or effects, Grima can't lose that resource from a treachery card, can still use it even if you can't spend resources, and it's always in play at any point of the round. Grima accelerates your game and combines extremely well with Lore's massive card-drawing effects.

For further craziness combine with Mutiple Masters of Lore and Damrod and you'll be playing the majority of your deck in no time at all. If you haven't tried Grima yet, give him a go. Also combined really well with keys of Orthanc to earn you money of the money you arne't spending. The king's counselor is an excellent addition to any trio of heroes.

Pairs really well with Erestor, Damrod, Galdor, Berevor, Bilbo, Pippin or Ori as their card draw will help give you options for Grima's resource assistance. Lore Aragorn also works well with the Rohan counselor to bring your threat back down later. Cost reduction characters like Theoden and Damrod can stack with Grima for free allies and traps each round.

Christian_Medic 869
Side note: you cannot play Sword-Thain on Treebeard per the game rules. It needs to be from any one sphere, and neutral is not a sphere. We got this clarified back in the Core days, when someone tried to &quot;Stand up and fight&quot; Gandalf. — Freeman 3 8/11/19
Haha I know you can't, I'm just saying it's a strong 4 cost card you could play in one round, and so is Treebeard haha — Christian_Medic 869 8/12/19
My bad, I had , read Sword-Thain ON Treebeard, instead of OR Treebeard :) — Freeman 3 8/12/19
Haha all good it happens your awesome Nickname is giving me cool Half-Life vibes so worth it! And also a helpful reminder about neutral allies to everyone never hurts. Have a great day — Christian_Medic 869 8/12/19
One of the best video games ever! Have a great day too and keep the reviews coming! — Freeman 3 8/12/19