Response: After a character leaves play, Éomer gets +2 until the end of the round. (Limit once per round.)

"I am named Éomer son of Éomund, and am called the Third Marshal of Riddermark." The Two Towers
Magali Villeneuve

The Voice of Isengard #1. Tactics. 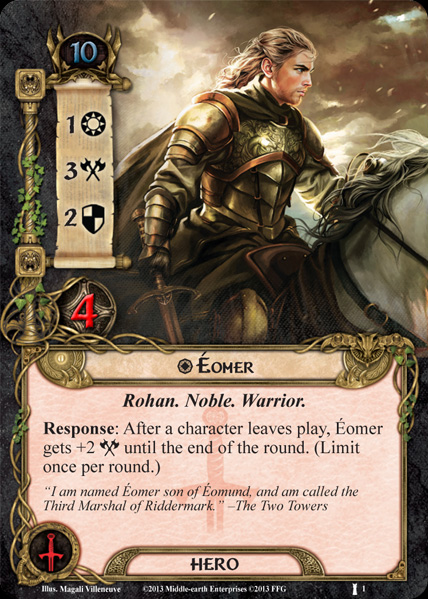 No review for the best Knight on the realm? That can't do. Eomer just need 2 attachments to make in any deck to make him a killing machine. Firefoot and Rohan Warhorse. It might seem a bit weird to have 2 mounts but ancient riders always carry 2 horses.

Having firefoot raises his attack to 5 and that will kills most low or medium level monsters. Having warhorse, he can repeat the attack again. Can you imagine putting Unexpected Courage for a red attack? Not just that firefoot ensures you don't waste the excess attack by distributing it another enemy.

His ability is bonkers if you put him in an ally heavy deck especially when you can just use ally fodders to defend and eomer will scoop up another +2 attack. Now you are looking at a 7 attack hero with just 1 attachment firefoot + 1 character leaves play.

Eomer shines brightest when you put him in a silvan or noldor heavy deck. He will be the perfect 3rd tactic hero (a common weakness for silvan and noldor heroes) and he just need 2 attachments card to work without hogging the silvan and noldor cards. In a noldor deck, it's even a blessing, as you can just discard extra firefoot and Rohan warhorse.

Why noldor and silvan deck needs eomer is because characters come and go via card abilities as well and allies generally have low health and bad defenders. That is just perfect to trigger eomer abilities. Thematically, it's a bit weird to see Celeborn or Elrond to send their people as blood sacrifice to power up eomer rage attack.

Simply but Eomer is a beast.