Response: After Glóin suffers damage, add 1 resource to his resource pool for each point of damage he just suffered.

His beard, very long and forked, was white, nearly as white as the snow-white cloth of his garments.
The Fellowship of the Ring
Tom Garden 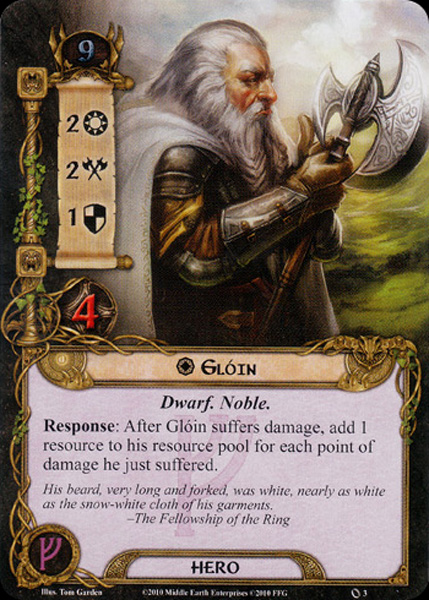 Gloin is a nice, low threat-cost hero with a pretty unique ability.

First, note that while every other hero with built-in, reusable resource acceleration is limited to once per round, his ability is unlimited, so Gloin can take on as many resources as he can withstand damage. This means he can be a great way to get extra resources throughout the course of the game, assuming you can keep the dwarf healed and or give him enough extra hit points through attachments that he can take on some hurt.

There are a few caveats, however:

That being said, he definitely has his good points:

So yeah, there's many a good reason to use him. You just might want to get those coins off of him as fast as you can and include a Fortune or Fate just in case!

AVeryGoodTale 163
Just thought I'd mention the influx of powerhouse gloin decks. They really give him new life. — Wandalf the Gizzard 1989 5/27/17
3

Glóin is for me the best dwarf in the core set. His ability is great, when you are able to handle damages (for example Citadel Plate, Daughter of the Nimrodel, Self Preservation, Protector of Lórien or Glorfindel). His stats are also very good, beside the defense, which is funny cause I usually use him as defender. Nice artwork. Verdict: 5/5.