Action: Exhaust Daughter of the Nimrodel to heal up to 2 damage on any 1 hero.

"Here is Nimrodel! Of this stream the Silvan Elves made many songs long ago, and still we sing them in the North...I will bate my feet, for it is said that the water is healing to the weary." Legolas, The Fellowship of the Ring
Magali Villeneuve 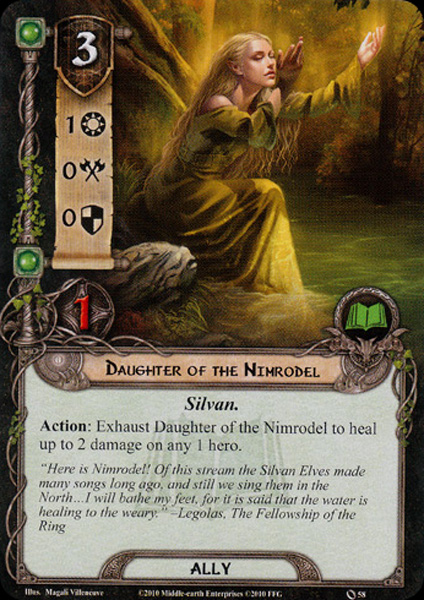 It is true that there are many other healing allies that are cheaper and can heal more than just heroes, Daughter of the Nimrodel is actually really good when combined with Ent heroes. As of this writing there are only two so far (Treebeard and Quickbeam), and both have abilities that are triggered by damaging them, and both abilities are really powerful. You might think sticking self preservation on those Ents would be better since it's harder for the Encounter deck to get rid of attachments than allies (usually), and for the same cost. And you would be right, except for the fact that Daughter of the Nimrodel has something in exchange for this vulnerability: the ability to heal fellow player heroes, and the ability to heal either Treebeard or Quickbeam depending on your current needs--i.e. a little more versatility than Self Preservation. Using these two in combination (Daughter and Self-pres) is really nice.

Mad Morderan 116
Daughter of Nimrodel totally satisfies my carebear attitude. — dunringill 1 5/23/18
While Ioreth outranks her by a lot, I had had a lot of fun playing a forest-themed Silvan deck with Treebeard. In that deck, this ally is fantastic as it quests for 2 with Celeborn without exhausting because of Galadriel and healing for three because of Elrond. — NERD 614 9/20/22
3

For someone, who just started with game and went only through the first adventure pack cycle, is daughter still the best healer in the game. Cost 3 for 2 healing points for any hero every round is still better then dedicated Self Preservation or one-time Lore of Imladris. I usually bring her even to non-lore decks, usually in combo of Éowyn and Stand and Fight. The only thing you need to watch out is using here ability at the end of round, so she would not be killed by any treachery card. Its also good that she is not unique, so can bring all 3 copies on the table if needed and she can work good even in multiplayer game, able to support other player heroes. The ability is actually very thematic to given content of the story and the artwork is very nice. Verdict: 4/5.

Daughter of the Nimrodel may be over-costed and out-done, but three resources for two healing a turn (barring direct damage) isn't terrible. Pretty much all the other healing allies are better, at least paired with the right trait. But still, she's not terrible, just overshadowed.