Action: Exhaust Errand-rider to move 1 resource from the resource pool of a hero you control to another hero's resource pool.

For the people of the City used horses very little and they were seldom seen in their streets, save only those ridden by the errand-riders of their lord. The Return of the King
Anna Steinbauer 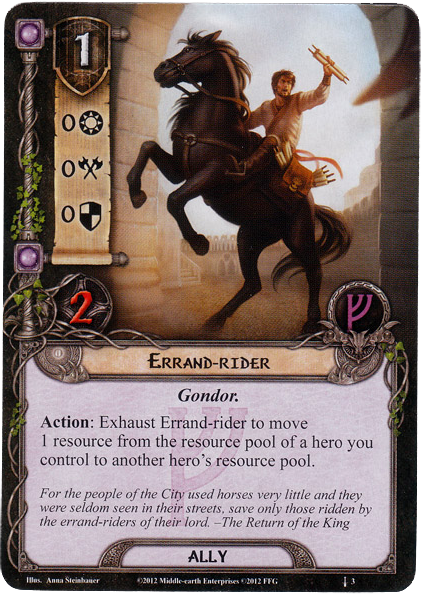 Errand Rider is an incredible splash card. He's a great fit for two different archetypes: the Gondor Swarm and a multi-sphere deck, but first, let's look at the Errand Rider in a vacuum.

That one cost immediately tells me this card is worth something. You'd be hard pressed to show me a one-cost ally in this game that is not good, and our serviceable friend here is no exception. Even with a blank text box, Errand Rider is a nice chump blocker that can even take some direct damage before biting the dust.

Now let's throw his action in the mix. The first thing you should have coming into this game as a new player is an understanding of sphere and resource pool balance. Having the ability to shift resources around is phenomenally useful. Your single Spirit hero? Now you can play those crucial two cost cards in one round or have a resource handy for some cancellation. Hand full of pricey uniques? Get 'em out there! If your deck has heroes from three different spheres, Errand Rider can even save games; and multiplayer takes him to a whole new level.

He also fits extremely well into your old Leadership Gondor swarm deck. This one cost chump becomes a serious contributor being boosted by Boromir and Visionary Leadership. Even if he dies the round you play him, a Gondor deck benefits just from having another ally around to key off of (AVGT, Herald of Anorien , Citadel Custodian).

As you can see, auto include glue ally in many decks. Don't let that stat-line fool you from giving this hard worker his due credit.

100% staple for multisphere decks. He'll get your money where it needs to go, and won't charge any of those goddamn fees - in fact, he'll even take a couple arrows or a sword to the face for you. It might not seem significant, but he provides a lot of value for one resource. Gondor trait is an added bonus, but he fits into a ton of decks without any effort.