Response: After Théodred commits to a quest, choose a hero committed to that quest. Add 1 resource to that hero's resource pool.

"Not all is dark. Take courage, Lord of the Mark..."
Gandalf, The Two Towers
Jeff Himmelman 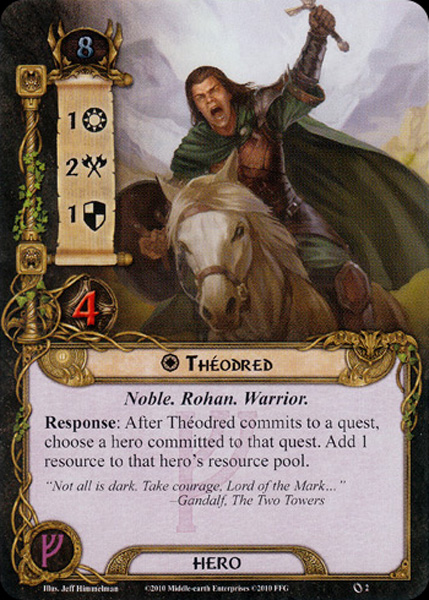 The Son of Théoden is a little bit of a tough card to come to grips with, at least for me. I want to like his ability; what's not to love about built-in resource acceleration?! He pairs well with any of the pay-1-resource-then-do-x heroes like Elladan and Elrohir, and, of course, core set Aragorn. And it's always great to have an extra coin available to play any one of those useful 1 cost events or to save up for a more expensive ally your next turn. The problem is, it's attached to a restriction, that you must quest with Theodred's meagerly 1 to gain it. And while this can be a useful way to pass coins across the table in multiplayer games, timing plays a significant roll in which players you can pass the coin to in a given round. And his stats are pretty low, so he's not going to be a ton of help in other aspects of the game either. So, you have to accept having a hero who essentially doesn't contribute much outside of his ability, or use some of the game's limited readying effects on a hero who can't contribute that well in other areas either.

Or at least, that is how it appears on the surface; let's dig a little deeper. It seems that there are some decent player cards these days that help matters some, several of which are Rohan focused. For instance, he could always ride his Father's steed, Snowmane, and get some use out of his limited attack power, and Celebrían's Stone, while clearly meant for Aragorn, can be played on any hero. And there is Steed of the Mark, but that's kind of defeating the purpose have having the built in resource acceleration if you have to use that coin just to ready Theodred after questing for only 1, especially since you have to choose to ready immediately after committing him to the quest. Also, there are several Rohan focused events that combine nicely with Theodred, like Charge of the Rohirrim, Forth Eorlingas!, Astonishing Speed, and the expensive We Do Not Sleep. And that's just it, they are all kind of expensive, costing at least 2 resources apiece, and they are out of sphere. This means that in order to really make use of Theodred as anything besides a place holder with a decent ability, you'll have to use up a good amount of those extra resources just to do it. So it seems that you really can't have both worlds with Theodred; he really is either a dedicated resource accelerator or you can pour the extra resources into making him a decent hero.

So, we are back to probably just using Theodred for his ability. Now, there are several other heroes that are pretty much just dedicated to using their abilities and not much else. Eleanor is the first card that comes to mind, but her ability can make or brake a game by it's self and is pretty clutch in 3 and 4-player games, where a few extra coins over the course of the game won't necessarily have the same impact, though it definitely could. And then there are cards like Beravor, but at least with her there are a lot of good cards that feed off of her traits and that aren't going to deplete her usefulness. And that's where the rubber really meets the road with the young prince; there are simply other, arguably better resource accelerators like Arwen Undómiel and Mablung, and, especially the Steward of Gondor that came in the core set in the same pre-built deck with Theodred. He's pretty much second rate in this regard.

Therefore, unless you are building a Rohan deck and need some help affording those expensive events, I'm not really a fan of this particular version of Theodred. I suspect that his inclusion in the core set, especially when designed to be used next to the high threat-cost of Aragorn, is why his stats are so limited. Hopefully one day the Son of Théoden will get a re-skin and we can sing of his glory in song! Until then, I probably won't be using him that much any time soon.

Underrated solid hero. Smoothing and acceleration. Only leadership Denethor, who is absolutely top of the charts good can do the things Theodred does. Theodreds stats are bad, but the have to be when his ability is so good. Consider, Mablung and Hirgon are powerful heros that people like, but they accelerate tactics resources only. People love Bifur as a glue card. Theodred can generate that lore resource instead of swapping a leadership for a lore resource. He is great with cousin Eowyn, but generally any hero you want to be a dedicated quester. That means your deck will need a defense or attack hero you can rely on, and allies to fill the other gap. You can use those hero level allies thanks to Theodred.

MinkeWhale 67
I know that at least from a Core Set-only perspective, a low-threat hero that generates resources (and unlocks Steward for even more resources) is simply great. — Blackhaven 1 8/2/19
6

If I use Théodred there is usually only few reasons, why to do it: his ability of generating resources, lower threat or his access to . He is the kind of glue hero, who fits only to specific kind of scenarios, where you need to generate a lot of resources as fast as possible. Otherwise there are other better choices, 'cause his stats are really not so good. Same goes for average artwork. verdict: 3/5.

As I continue to play through the progression of this game, I've evolved my opinion of Theodred. Core and other early game cards can be classified into a few categories: 1) evergreen classics that stay relevant (think Steward of Gondor, A Test of Will, Feint); 2) playable starter cards that fade or are superseded over time (think Dwarven Axe, Longbeard Orc Slayer); 3) sleeper cards that didn't seem good at first but were revived by some later cards/strategies (think Will of the West or maybe Son of Arnor) and 4) those that, to be charitable, never quite become playable (you know who you are).

Theodred is to me a typical category 2: fine early with a limited card pool, then less and less attractive. Early in the progression he splashes well as the lowest threat hero in a sphere that typically runs 10+, has obvious synergy with the most powerful hero in his sphere in Aragorn, and generally provides needed resource acceleration. But as quests evolve and in particular require strong first round starts, the tension between his stats and ability becomes his undoing. A dedicated quester with 1 willpower becomes more and more difficult to drag along with you as the early rounds become more demanding. Add to this the increasing options for either threat reduction (making a higher cost hero easier) or resource acceleration/cost reduction (making his ability less rare) and he just becomes more and more difficult to play. Even just giving him a second willpower by swapping his stats around would help quite a bit, but it is more of a struggle with each new AP in the progression.