Steed of the Mark

Attach to a Gondor or Rohan hero.

...fresh horses were always in readiness to bear his errand-riders to Rohan in the Noth... The Return of the King
Sandara Tang 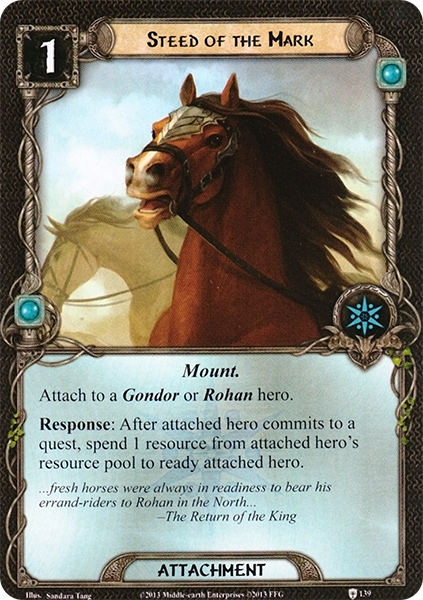 In a Fellowship with lots of Gondor and Rohan heroes it can be a good mount to add (and fetch with the Westfold Horse-breeder). Its effect is costly but in some turns can be really worthwile and it's not unique (like Light of Valinor and Snowmane), not one-shot (like Cram and Lembas) and less conditional than some other readying effects.

When I first saw this card, I thought it would be something I'd use regularly. In general, I really like hero action advantage and feature it in many decks. It just fits my play style. So I use even not-so-popular heroes like Prince Imrahil more than most and always include hero readying cards as much as I can. This card sounded great -- basically it gives the attached hero the ability of Aragorn, which I have often incorporated into decks.

But then I started to try to include this in decks, and I just don't think it's worth it. I won't say never, but I have tried to put it into many decks and always end up cutting it. First, it is limited to Gondor or Rohan heroes, so is limited from the start. Not necessarily a deal breaker as the same can be said for Light of Valinor or Fast Hitch, but limiting. No, the real issue here is the cost. Light of Valinor gives the same effect for the same up-front cost but no need for the extra resource per turn. Unexpected Courage only costs one more up front, has no ongoing upkeep cost and is more flexible because its not restricted to readying after questing. And Fast Hitch just blows this away on all fronts. The only way this makes any sense to me is in combination with resource acceleration, preferably Steward of Gondor which also makes the attached hero eligible for this card. But now we're talking about a 2 card combo across different spheres that costs 3 resources to set up and uses half of Steward's output just to keep itself going. And the thought of drawing a second of these is even worse -- now you're dedicating 2/3 of your resources every round just to keep them going.

This is a card I really want to like. I've really tried to like it even. I can hypothesize about some real quest specific edge cases where it could be barely justified -- maybe on Eowyn in Return to Mirkwood so she can handle escape tests even if you don't find your Unexpected Courage. But I just can't get this to stay in any deck.

Other than the cost, as others have stated, my other issue with this card is that there really aren't a ton of Rohan heroes I'd feel like using this on. Tactics theoden is probably the best that I can think of where I'd want to quest AND attack or defend. most other Rohan heroes (eomer, eowyn) usually only do one or the other.