Ahead nearer the walls Elfhelm's men were among the siege-engines, hewing, slaying, driving their foes into the fire-pits. The Return of the King
Dinodrawing

Temple of the Deceived #57. Leadership. 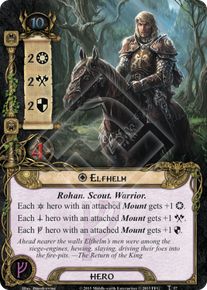 is home to several heroes that could be considered the leaders of their archetypes; Kahliel makes the Harad deck work (well, as well as it does), Hirluin the Fair's the keystone of Outlands, while Celeborn pretty much defined Sylvans. Elfhelm is another example of this, a hero with okay stats that helps a new archetype to function. In this case, Mounts.

Elfhelm changes the math involved in playing Mounts: heroes get +1 from the first Mount played on them, effectively turning Windfola into 1 cost for +2 , heroes get +1 , turning the likes of Rohan Warhorse into one of the Weapons it might otherwise replace if you squint, and heroes get +1 (as if Armored Destrier needed to be any better). (Though, where's the boost? Would giving Corefindel +1 while he has Asfaloth be too strong?) However, they only get the boost while they have a Mount attached, not for each Mount they have (which I'm thankful for, that would be just bonkers). Effectively, Elfhelm allows you to get an improved but rapidly-diminishing return on playing Mounts, similar to how Hirluin the Fair doesn't really do anything to help your Outlands allies after they're in play, instead only helping get them into that state.

Two important things to note about Elfhelm; additional sphere icons provide additional stat boosts (Aracoren with Roheryn and Celebrían's Stone gets +1 , , and ), and the effect is global, increasing Elfhelm's power the more players there are in the game. As countless, smarter players have theorized, Elfhelm in a four-player fellowship with lots of Mounts and Songs can (ironically) be a real workhorse, but even in a more compact game, even in solo, Elfhelm is still a very useful hero, especially combined with the Signals from Mirkwood. Elfhelm combined with the likes of Dúnedain Mark and Dúnedain Warning effectively allows you to play Build-A-Hero workshop, with 1 Warning and an Armored Destrier turning Elfhelm into Beregond without sentinel but with readying and pseudo shadow cancellation. With Elfhelm and Armored Destrier (a pack combo every bit as strong as Thranduil and The Elvenking), I've been able to easily stay engaged with multiple enemies as the questing deck. Throw a couple Dúnedain Marks in the mix, and you have a defender and counterattacker all in one. It's no Grimbeorn the Old, but it's still good.

Elfhelm follows in the footsteps of the other Dream-chaser hero, Denethor, not being the most powerful alone but functioning as a very efficient enabler of certain deck types. While Denethor basically stays "You can play Steward T1 in normal mode," Elfhelm says "Throw in Songs, Signals, and Mounts and give any hero any statline you like." Pay no attention to Elfhelm's base 2 , 2 , 2 , and 4 ; that's the base, the bare minimum you can expect to see. The maximum, that I've seen at least, involved Elfhelm blocking the Hill Troll. And taking no damage. And I'm not sure he was exhausted afterwards.

(Wait, how much of this review was actually about Elfhelm and not "Elfhelm makes Armored Destrier even better?")

Elfhelm is a fairly well-rounded character. With 2 of all stats, 4 health, and 10 threat, he is not a bad character. In my decks, I normally have one quester, one attacker, and one defender. Elfhelm is great because he can do it all fairly well. He works great as a quester when you use the card Scouting Party and also have at least one Rhovanion Outrider in play. This "power play" can use many allies like core set cards: Snowbourn Scout and Lórien Guide. If you have a deck with any horses, you should definitely have Elfhelm in your deck due to his ability to boost both himself and other heroes. For a leadership hero, Elfhelm is not to expensive, yet he is very well-rounded. I would advise having him in your leadership deck for sure, if not a mixed deck.

Necessity 25
House rule: Lore heroes with an attached mount get +1 HP — CDavis7M 144 10/23/18
with aragorn and roheryn he gives a +1 willpower and +1 attack not to mention the fact that you might have other sphere adding artifacts attached. Also great in a song deck. — Guccigreek 29 8/26/20