Response: After Grimbeorn the Old defends an attack, spend 1 resource from his pool to declare him as an attacker against that enemy (and resolve his attack). The defending enemy gets -2 for this attack. 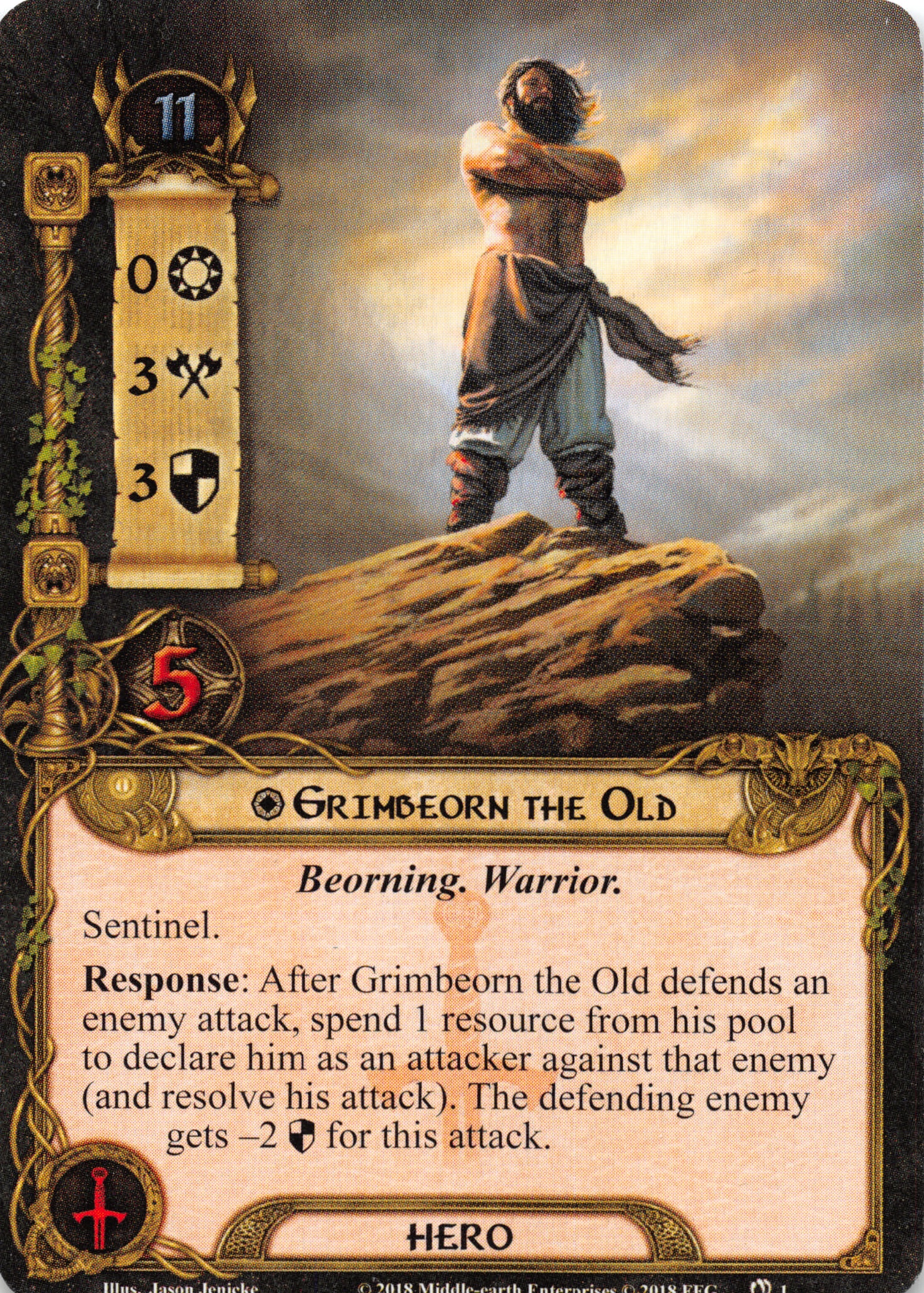 If I had to give this hero a score it would be an A, possibly even an A+.

I included him in a beorning deck for fun and thematic purposes, and boy was he fun. I underestimated him at first thinking that he would be a fun gimmick, but not as good as his younger self, and I was proven to be dead wrong. I would put him on par with his other version if not better. That's saying something considering I like the other hero Beorn a lot.

For one thing, he has sentinel which is great for me because I only play on multiplayer so I can support weaker combat decks.

His ability is reeaaaallllllllyyyyy good! I was so impressed at how many times I found myself using it. It is basically built in action advantage with a bonus that he reduces the enemies by 2, effectively giving him a boost in attack power.

His stats are also all in the right place so he functions effectively as a defender AND attacker.

I can see that Fantasy Flight designed him to help the player with combat for the early rounds before your deck gets set up. I wonder if you're allowed to make a deck with Grimbeorn the Old and Beorn? That would be fun!

Good designing Fantasy Flight! You guys have my approval.

FolcoBoffin 249
You certainly can make a Beorn + Grimbeorn deck. These are different people -- this is Beorn's son (cub?). And you're right his ability is crazy powerful! — GrandSpleen 1335 1/15/19
Since his attack is part of a response, would you be allowed to use him for a second attack if you could ready him with unexpected courage? — Bard the Bro-man 19 3/7/19
Yes you can ready him with cards like unexpected courage for a second attack - since there is no text on his card about limit once per phase / round. Any limits has to be specified or it's considered to have no limits. BUT remember that all the resources has to be spent from his personal pool. So you either have to save up, or make a combo that includes both readying AND resource-acceleration. — Goggen 106 3/8/19
Question about his ability. If he defends an enemy, and the shadow effect says &quot;return attacking enemy to the staging area after this attack&quot;, could Grimbeorn still activate and resolve his ability? It seems to me that the timing would allow it, since he defends, then triggers and resolves his response ability, and then after the attack is done the enemy goes to the staging area. Any feedback on this is highly appreciated. Thanks! — efrenciscus 38 5/11/20
@efrenciscus Yes, the ability doesn't care where the enemy is, only that Grinbeorn was the defender — Bushidough 4 5/11/20
@Bushidough thank you a lot! :) — efrenciscus 38 5/12/20
Rohan Warhorse plus Captain of Gondor is his best friend — LEGOlas 107 4/28/22
6

Extremely powerful hero. He is now in my "power deck" as in the deck you pull out when a scenario is just ridiculously hard. I've actually gotten to where I don't use him unless I run into those types of scenarios because with the right cards he becomes quite broken.

Not only is his ability action efficient (defend and attack), but it also breaks certain enemies/shadow card chains. There are some enemies who do things like return to staging area after they attack. The timing of his ability is such that he can counter-attack before said enemy can take its escape action. Brilliant. It also breaks nasty shadow card effects like "makes an additional attack after this one".

Now here's the ultimate OP combo: Steward of Gondor - Grants tons of resources and the Gondor trait (this is important). Wealth of Gondor - Free card for extra resources, you'll need it. Gondorian Fire - Turns those tons of resources into tons of attack, which sticks around for the entire phase. Gondorian Shield- Two additional shields. Rohan Warhorse - Re-readies after he kills an enemy.

And if you have those particularly nasty enemies/shadow effects that break through or you're dealing with several enemies. Gondorian Discipline Behind Strong Walls Hold Your Ground!

And lets not forget the thematic card Beorn's Rage, which will also greatly help him early on. The real trick is just making sure he gets plenty of resources.

Yes, it takes time to get all this going. But it's not like hes a slouch until then and obviously there will be other things at play. The point is within a few turns you'l be clearing the table of trolls and enemy captains with ease anywhere on the table. This is really useful if you are in a fellowship with a combat-deficient player when a boss type enemy bounces to the first player at some point in the round. Because he's sentinel and de-facto ranged he can defend and attack for anyone.

Now, with all that said. I find it frustrating that he has no synergy with beorning allies. Frankly, the two are in conflict with each-other. Beornings are relatively expensive allies and yes, I know about beorning-skin changer's cost-saving ability. Grimbeorn's ability is resource intense, and he's the type of hero that begs for a stack of attachments.The other thing is that Grimbeorn is so combat efficient that you don't necessarily need beorning allies.