Conflict at the Carrock #26. Leadership. 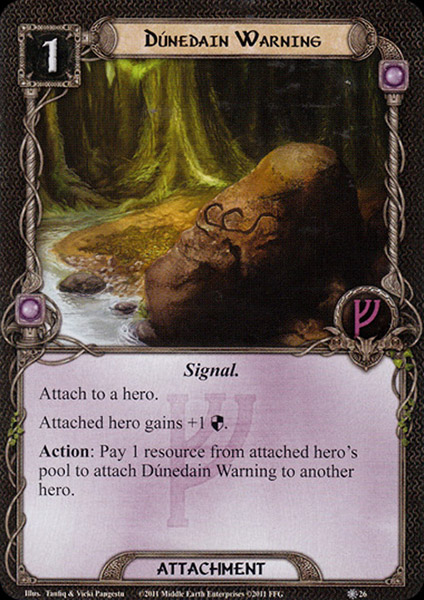 Warning is solid attachment card, very useful, mainly while using a heroes with lower value. I usually use two copies in deck, which is good enough to boost one defender. I also use moving action with this card much often then in the case of Dunedain Mark. Only the artwork could be a little bit better. Verdict: 4/5.

I'm not sure if this card really needs another review, but as I've progressed in the game I've realized finesse moves make this card really invaluable. Additionally this card isn't restricted, so it can be piled up with itself and other defensive attachments.

As I've understood action windows better, I find shifting this card around can be key. Siege phase, move it to your questers, then during combat shift it back to your defender. While it can't cancel/respond to a shadow card, there is an action window between revealing the shadow card and determining damage, so there is an opportunity to change the defense value of a hero before applying any straightforward damage. Playing two-player, first player defends, then action window allows moving the warning to the defending hero of the second player; in a two player game, the next round with player order flipped, the move can be repeated if necessary.

Obviously these moves cost resources, so there is a definite opportunity cost involved and are probably prohibitively expensive if you're moving attachments a lot. But it's can be the difference you need to make or break a quest sometimes, since losing a hero or, to a lesser extent, failing a quest phase can prove critical.

Then there are the Dúnedain Warnings of the world. +1 , isn't restricted, no 'attach to' restrictions, can be moved around if needed. I'm not sure you need anything more than your brainstem to use this card effectively; draw, spend 1 resource, attach to hero who will defend, ???, profit. There is a very useful quote I got from the website agot.cards regarding cards like this; "Beef is beef." (Link to article including the quote: agot.cards) If something has good cost to stats and it works, you don't need to type the next LotR describing how good it is; sometimes, you can just say that beef is beef.

(its interesting: finding 200 words to describe the Dunedain Warning isn't easy.) no one would question its inclusion in a mono leadership deck, also good for multiplayer. 4 stars in the Dunedain sky.

Dunedain Warning is a nice, good, vanilla card. Extra defense is never bad (except on maybe Gimli?) and this one is non-restricted, costs one in the richest sphere and has that extra versatility if the encounter phase goes awry. One of my favorite uses is in a resource gen. deck where in the late game, it often ends up top-decking, so the money piles up. I can pass this around to every hero I need to defend and know they'll be in ship-shape.