Action: Each player returns the topmost attachment card from his discard pile to his hand.

...he was just sitting down to a nice little second-breakfast in the dinning-room...
The Hobbit
Magali Villeneuve

Conflict at the Carrock #27. Leadership. 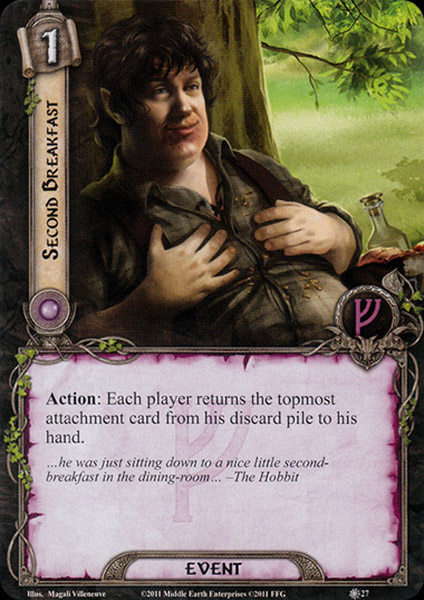 There doesn't seem to be much love for Second Breakfast, I overlooked the card originally because I'm almost entirely a lore player but after looking for answers to Druadan Forest I found I really like the card. I think it's amazing in the scenario for cycling a specific attachment like Thrór's Key. In a four player game where you have one or two people mostly responsible dealing with the enemies we've gotten a lot of use out of attachments like Cram and Miruvor. One of the complaints is that you have to pay for the card after returning it to your hand but these readying cards are often free. Another free attachment that our spirit player gets a lot of use out of it is Good Meal, this card is especially useful in Druadan Forest for playing events after all your resources have been stolen but also allows them to play cards like The Galadhrim's Greeting for one resource. Chump blocking, which is pretty much discarding a card and paying a resource, is kinda the same thing as Cram or Miruvor except it would allow you to get value from Second Breakfast.

Cram and Miruvor really shine early game when you're trying to clean out the enemies from setup and haven't developed the board yet, having your heroes who if they were allies would cost 3+ resources get a second action is huge.

I really like Expert Treasure-hunter, I can see it discarding an important attachment if you're looking for allies. It can also kinda cancel the drawback of Daeron's Runes and all the other cards with a discard effect.

I think Campfire Tales is usually a better version of it unless you need something like Thrór's Key for the scenario. I can definitely see Second Breakfast adding 3-4 cards to the player's hands consistently for one resource and it doesn't get much better than that.

Traps are single use attachments and I'm sure there are more one use attachments later on like Ranger Provisions, Elf-stone and Secret Vigil that make Second Breakfast even better. There is no shortage of great one use attachments or ways that you'll be forced to discard cards you'd prefer not to, if you feel the need to draw additional cards consider this one.

Covaxe 12
I love it when people stand up for corner case cards. Good job! — Wandalf the Gizzard 1997 3/13/18
I'm surprised anyone thinks this card is corner case. It's a fantastic card. Any kind of recurring is powerful....especially with the prevalence of attachment hate shadow effects and even better with single use attachments. — MDuckworth83 3127 3/17/18
2

Second Breakfast is a card that makes me laugh. It's not just the art, it's just such a bad card! How many times have there been an attachment in the discard that you would warrant a card slot and a resource for? Granted, It's better in multiplayer, but aside from Cram and Haradrim Spear; (lets not think about Borne Aloft) There aren't many uses for it (other than depriving you of your appetite).

Wandalf the Gizzard 1997
I think that this card is worth another look. :-) I agree that it's much stronger in multiplayer, certainly. Sometimes picking up an attachment card is worthwhile just because it's a card in hand, such as if someone is playing Spirit Eowyn. Additionally, I would readily add Explorer's Almanac and Good Meal to the list of attachments that are worthwhile getting from the discard pile. — HappyHappy 156 8/13/17