'This was made by Thrór, your grandfather, Thorin.' he said in answer to the dwarves' excited questions. 'It is a plan of the Mountain.' Gandalf, The Hobbit
Jake Murray 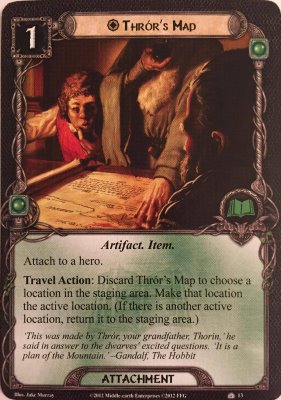 An incredibly under-rated card in the current state of the game. When first introduced to Thror's Map I heard that it used to be really good before the errata nerfed it, and so figured (as I think most people did) that post-errata it just wasn't that worth it. It's easy to see it as just allowing you to travel to a second location if you immediately explore the first with something like Strength of Will or Expert Trackers, but that's a really narrow perspective.

There are a couple of specific situations where it can really shine - of course there's the fact you can use it in Knife in the Dark to switch Weather Hills in and out and lose all the Nazgul there (and other enemies if you really want rid of them without the combat); and it comes in really handy when you have those annoying locations with "When faced with the option to travel, the players must travel to [this location] if there is no active location." Travel to the location you're forced to travel to, then use the Map to switch it out for one you actually want to be at.

The really big reason why you use this card is simple though - Travel costs. By using the Map to make a location active you don't have to fulfil the travel cost. Now the thing is, and this is part of why this card has been so overlooked, back when it was released travel costs generally weren't that bad. They've gotten worse over time. Of course it's still a variable thing based on what quest you're playing. Compare the three quests in Over Hill and Under Hill, where this card was released to say, Murder at the Prancing Pony and the difference is staggering. I'm not sure OHaUH actually has any locations with travel costs, rendering the Map pointless, but then Prancing Pony on the other hand has such beauties as:

"Travel: Each player discards 1 random card from his hand to travel here."

"Travel: Raise each player's threat by 1 to travel here."

"Travel: Reveal the top card of the encounter deck to travel here."

Under those circumstances, being able to dodge all those effects with a single 1-cost attachment? Absolute bargain. While it was less of a big deal back when it was released, against the tougher travel costs which appear in some more recent and nightmare quests, this card is an absolute gem.

Warden of Arnor 5209
Thror's Map can be essential for certain quests, like Prancing Pony or some quests from the Lost Realm cycle. IT's almost a staple card. — Lecitadin 184 5/3/16
Would this not be awesome in Helms Deep? Switching nearly explored locations with new ones. — DurinVoronwe 15 9/23/16
Another use is with Guarded Ceaselessly and Explorer's Almanac in conjunction with Mirkwood Hunter (to play them for cheaper), or with Forest Road Traveler, to get their stat buffs. — Mad Morderan 116 2/11/20
Meaning that, say, you play Guarded Ceaselessly and Explorer's Almanac on the active location in your planning phase. This normally wouldnt make much sense to do, since both effects are more useful for locations in the staging area. But you put them on the active location to get a cheap Mirkwood Hunter, and give any Forest Road Travelers a Will boost while you're at it. Then use Thror's Map to switch the location out and travel to a more important location, and put the location with attachments on it to use for next turn. — Mad Morderan 116 3/14/20
5

Just to help out people like me who are curious as to why this is saying "discard" instead of "exhaust".

Apparently, FFG decided to start printing this card with new text in late 2019 and has yet to update the official FAQ...and possibly never will.

I have no idea what we're supposed to do with this information. I'd say if the card has never officially been errata'd in the FAQ you're fine to play as shown in the FAQ, and ignore this second "unofficial" errata....so odd.

thereelaristotle 7
I wish they had preserved some of its identity. Maybe instead of discarding... it goes to the top of your deck. Maybe it takes exhausting the character and the map. Something, anything else. Discarding is a very draconian approach to balancing it. However, having said all that, I don't disagree with this errata. — Madd.Dawgg 29 1/5/21
3

Post errata, I believe the card is still very strong (especially in certain match-ups/fellowships). Compared to Strider's Path, it is just a better way to avoid Travel effects. It requires a bit more infrastructure though. Erebor Hammersmith, and Reforged both come to mind as top choices.

This is case-in-point example of a card with deep tactical usege and it plays far better than it "looks on the paper". Let's see what we can do with it: 1) "Mr. Obvious" is to get around costly travel effect. 2) To dogde incredibly high-threat location before questing resolves, even if just flipped from the top of encounter deck 3) To dogde prohibitive abilities like preventing you from casting attachments during planning phase 4) To dodge enemy buffs during combat phase 5) To dodge end-of-turn nasty effects (e.g. raising threat) That is quite a list. Suprisingly often, there are multiple of locations covering different points in this list in the staging area at the same time. The thing of beauty is that you can actually mitigate two locations by switching them with proper timing. Looking for this type of interaction is what amuses me greatly in this game.