Action: Choose an attachment with a printed cost of X in any player's discard pile and play that attachment for no cost. (The chosen attachment can belong to any sphere of influence.)

The Sword of Elendil was forged anew by Elvish smiths... -The Fellowship of the Ring
Sebastian Zakrzewski 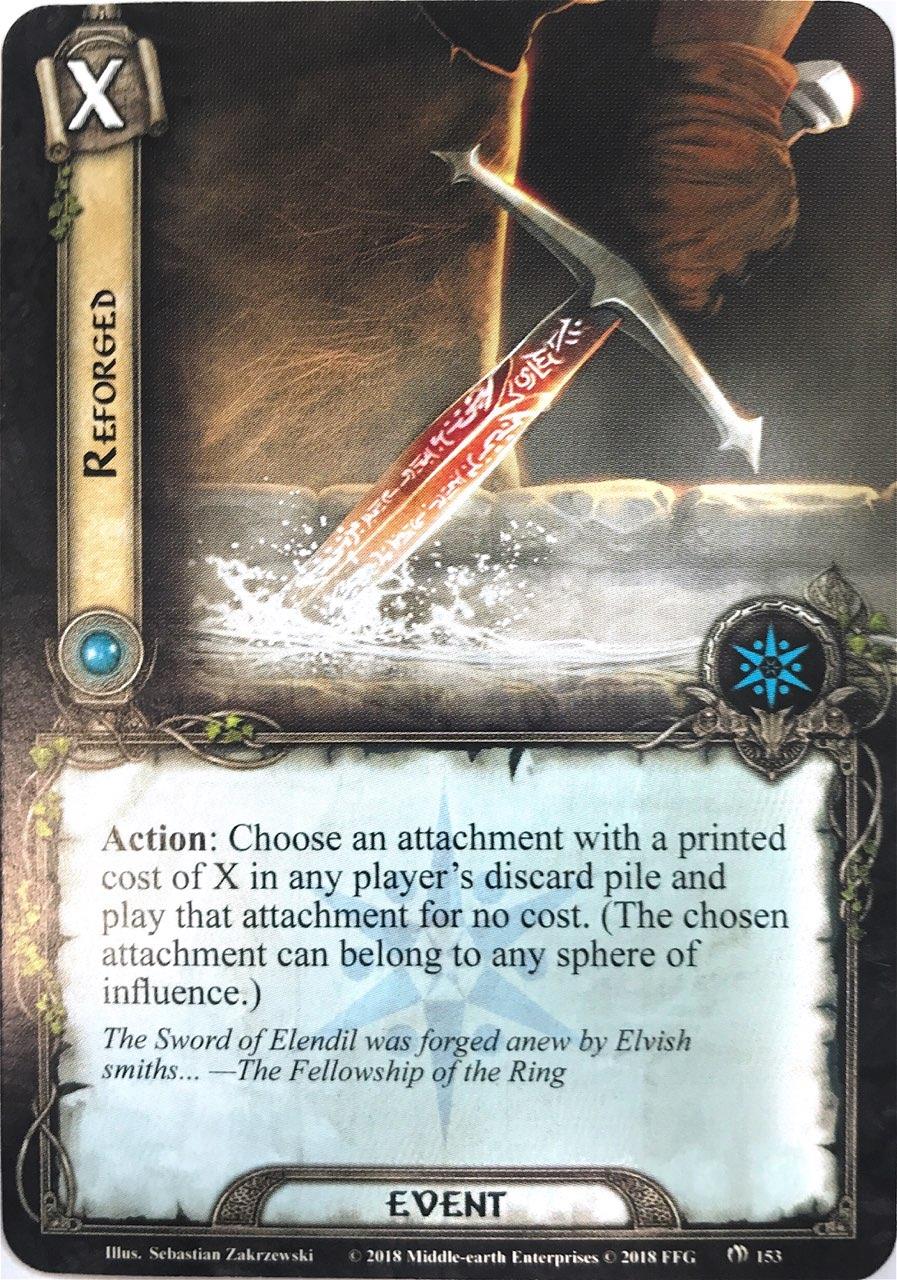 Well, here you go, the attachment version of Stand and Fight, your possibity of playing Steward of Gondor without having any Leadership heroes at all or being forced to play a Song of Kings, works really well with the standard Spirit deck/hand milling. Obviously this can also be used to equip powerful tactic items like Citadel Plate in mono-Spirit which opens quite some new possibilities for Spirit.

Borbland 9
Another thing to note is that this is a way to play attachments outside of the planning phase. The big distinction between this card and stand and fight is that there are tons of ways to play allies outside of the planning phase. As far as I know this is the only card that allows it for attachments — Jtothemac 455 7/25/19
Yeah, being able to play Forest Snare without having to eat an enemy attack first or recycling Path of Need are amongst the many fun uses of this awesome event. — Alonewolf87 1620 8/11/19
Awesome point about Forest Snare! And Path of Need is my favouritie attachment in the game. — Christian_Medic 856 8/12/19
You can also cheat attachments into play out of the planning phase using Elrond+Vilya. — eddyvan 29 8/28/20
All great points. Also, this means if you are trying to decide who needs the armor or weapon, you can wait until after the encounter phase to put it on whoever needs it most.ull it — Mad Morderan 114 5/19/22
Other good targets for this event are the guarded attachments. As an example, you can play Reforged after quest resolution, meaning that you won't need to deal with its guardian's threat on that turn. Therefore, if the guardian is a location, and you just explored the current active one, you are going to be able to travel immediatly, at the same moment the attachment has been played. If the guardian is an enemy, you will have the upcoming combat phase for defeating him and release the attachment. You first need to have the attachment in your discard pile, that's true. But running a Noldor or Dwarf deck it shouldn't be an issue. — PablOvi 92 11/27/22
While that's true, Return of the King does the same thing. However, you still have a good point PablOvi — NERD 522 11/27/22