Attach to a location in the staging area. 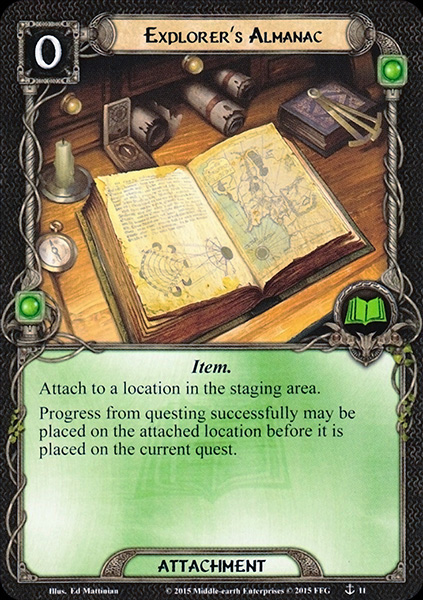 Explorer's Almanac, IMO, is the epitome of 'Bad attachments that attach to locations.' It provides a constant bonus that can be better provided by Northern Tracker, and it goes away even faster than Power in the Earth and Guarded Ceaselessly. It's not completely useless-I can see it being useful in quests where you don't need to make progress, like Three Trials, and Haldan is going to love this-but it's pretty close. It gets you out of location lock by questing successfully, except isn't that what location lock prevents you from doing? It's vastly inferior to Northern Tracker, it's worse at its job of location control than Power in the Earth (which isn't that bad, IMO,) and is just overall a card too niche to see the light of day.

AlasForCeleborn 525
This is actually not a bad card when you think about it. I probably wouldn’t let it take up deck space, but it’s free. Think about it this way: in a four player game, locations are piling up. You travel to and make active two locations (and avoid any travel effects). It can be game-saving in multiplayer to get rid of extra locations. This card doesn’t replace Northern Tracker, but it’s still great. For zero resources you can nuke an extra location at the small cost of a couple progress. — Wandalf the Gizzard 1991 8/14/18
I'm actually warming up to this. The main targets I can think of for this are high threat locations, which you'll either want to travel to or get rid of via direct progress effects, some of which snipe that location off before the next planning phase, when you could play the almanac, or, at which point I can see a use for this, locations with low threat, high quest points, and bad effects, like the Approach from Cair Andros, Sinking Bog from Nin, Broken Battlements from Lost Realm... Now that I think about it, it's not that Almanac is bad, it's just niche. Very niche, yes, but niche like Power of Orthanc; nigh-worthless in half the games you play, but very, very nice in the other half. — AlasForCeleborn 525 8/14/18
In my opinion, its main use is to squeeze past impending location lock in a four player game. It's definitely better than Power in the Earth. Hey, do you think Haldan's location attachment archetype will revitalize cards like this, PitE, Hithlain, and Guarded Ceaselessly? — Wandalf the Gizzard 1991 8/15/18
Actually, I think PitE and this are two cards with vastly different purposes; PitE is meant to help break you out of location lock/quest, hopefully by targeting a location like Endless Caverns from Dol Guldur that you want to just ignore for the game (if it weren't for the forced travel, the East Bight would be another great example) while the Almanac is made to allow you to dodge location lock preemptively and bad Travel/While Active effects, in exchange for being a more temporary questing boost. As for Haldan, I personally think he's going to give this a bit of a boost, maybe PitE, honestly, I don't think he's going to give Hithlain a big boost, but Guarded Ceaselessly is pretty much going to be an auto-3X in Haldan deck's; it just says attach to a location, so (assuming you can quest for enough,) it's basically a 0-cost event that says &quot;Response; after passing the active location, draw a card.&quot; Sure, that's in the sphere with Daeron's Runes, but still, card draw is card draw. — AlasForCeleborn 525 8/15/18
Good points! With Guarded Ceaselessly really only trims down deck space, though, since the card draw just replaces itself. Of course, there are cards that get boosts when locations have attachments, like the ally spoiled in Fire in the Night. — Wandalf the Gizzard 1991 8/16/18