Action: Place 2 progress on any location. Resolve that effect again for each copy of The Evening Star currently in your discard pile (you may choose new targets).

...for ever still a herald on
an errand that should never rest
to bear his shining lamp afar,
the Flammifer of Westernesse.
The Fellowship of the Ring
Katy Grierson 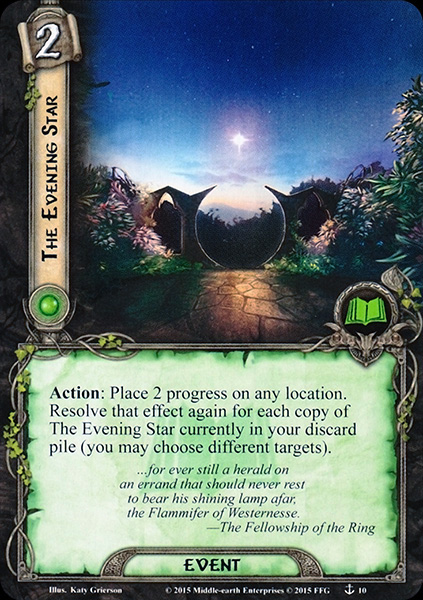 The Evening Star, last of the Noldor discard events, mightiest of the Four. Beautifully illustrated by Katy Grierson, and flavored with the ending lines to a magnificent work of English poetry (a beautiful rendition of which can be found here), the Evening Star is an aesthete's dream, a work of beauty seemingly of Elvish quality. But does it bear the mark of their martial skill as well? Is it only fair to look upon, like stained glass, or does it have the strength to resist the Shadow?

First, it costs 2 to play, making it relatively expensive for an event. However, this cost has a hidden upside, one that I neglected to mention in my reviews of its cousins; it increases the consistency of Zigil Miner, who, as the Noldor Imladris Stargazer improves Dwarf mining decks, improves Noldor discard decks, demonstrating once again the great profit that Unlikely Friendship between these two races can forge. In addition to generating the resources to pay for the Noldor discard events, Zigil Miner helps dump them in the discard pile, powering up your remaining copies. The only thing that could improve this synergy further is a card like Zoey's Amulet from the Arkham Horror LCG, allowing repeated plays of the events while queuing them up again to be either drawn and played or discarded to help pay for the events you do play. But I digress.

Second, the Evening Star places 2 progress on a location. This is close to the power curve for events that place progress, few though those are, though I would argue that the Evening Star is actually above the curve in one respect; unlike Ancestral Knowledge and Strength of Will, but like Ride to Ruin and Expert Trackers, the Evening Star can target any location in play, not just the active location. This is incredibly powerful, allowing you to bypass bad Travel costs or deal with a high-, low-quest-point location that might end up location locking you.

Third, you then resolve this effect again for each copy of the Evening Star in your discard pile when you play it. Because events do not go to your discard pile until they resolve (allowing you to exhaust Mithlond Sea-watcher to pay Skyward Volley's additional cost if there's a character on the top of your discard pile), this means that you only start getting additional resolutions on your second Evening Star. However, as the first Evening Star you play is quite powerful on its own, capable of immediately exploring somewhere in the region of 109 locations, this isn't really a problem; the Evening Star starts out bright and gets brighter as you play more copies as opposed to starting dim and only getting bright when you play later copies (unlike poor Elwing's Flight). Once you do start playing your 2nd and 3rd copies, the Evening Star glows as bright as Earendil himself; being able to either explore multiple locations with ≤ 2 quest points (like the infamous Brown Lands) or being able to explore a bigger location (like Rhosgobel) is incredibly powerful, and being able to spend 2 resources to simply discard the East Bight, while inefficient, is still a great feeling.

Overall, the Evening Star is like the Noldor it was meant to work with; beautiful to look upon, and at the same time a credible threat to the Shadow and its minions. Point-and-click location removal like this is incredibly powerful, and the sheer flexibility of the Evening Star (it can target locations in the staging area, it's a straight Action instead of a Quest Action) enhances that power. If you don't want to lose due to location lock but don't think that the quest you're trying requires consistent location control (i.e., the quest starts with a threatening location in play, but the other locations in it aren't too bad), follow the Flammifer of Westernesse and slot in the Evening Star; you'll find that, like the light it provided Sam in Galadriel's phial, it will light your darkest hours and truly earn the name Gil-Estel, Star of High Hope.