Quest Action: Ready a questing character and give that character +1 until the end of the phase. Resolve that effect again for each copy of Elwing's Flight currently in your discard pile (you may choose different targets).

There flying Elwing came to him
and flame was in the darkness lit;
more bright than light of diamond
the fire upon her carcanet.
The Fellowship of the Ring
A. M. Sartor 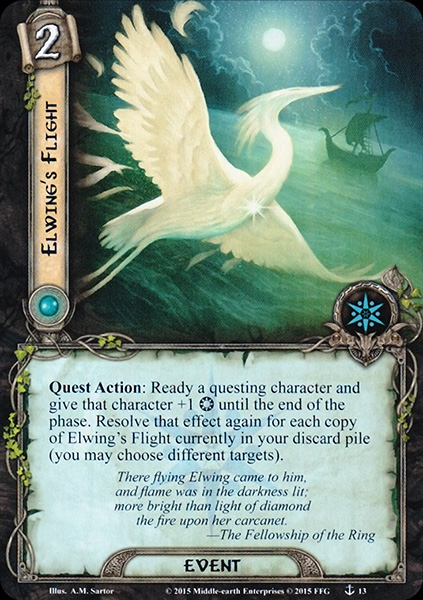 Elwing's Flight and Captains of the West are two of the cards that I think experience the most benefit from being in a deck with access to Good Meal. Their effects are incredible when they go off successfully, but they're so expensive for one-time effects that it becomes hard either to include them in your deck or pay for them if you do include them. This is especially true for Captains of the West (3 cost for a situational, temporary boost is typically not a good thing), but Elwing's Flight suffers from this problem as well, especially seeing as you need to see multiple copies of it for maximum effectiveness. However, if Elwing's Flight does reach its maximum effectiveness, it becomes a surprisingly powerful card, one that, in my opinion, quite justifies the support dedicated to it.

First off, small quibble with this and The Evening Star: Why no Song trait? It's, like I said, a small quibble, but it is kind of annoying. I don't know why, but I feel like this card would fit perfectly in the Song archetype.

Annoying lack of Traits aside, Elwing's Flight is a surprisingly thought-intensive card. It's not just fire-and-forget like Escort from Edoras; you have to strategize, not just when you play it, but if you should even play it. Let's say one of your heroes is Éowyn and you draw your first copy of Elwing's Flight; is the 2 resources it costs to play Elwing's Flight worth the ready it provides you? The +1 is immaterial in this example because you'd get the same benefit whether you play or discard it to Éowyn, so which is better; 2 resources for the future or a ready character in the present? The majority of the time, for the first copy you draw, this isn't really a choice and you discard Elwing's Flight the first chance you get. But what about the second copy? Is 2 ready characters worth 2 resources? The third copy, assuming the other 2 are in the discard pile, is almost always worth it, 3 pseudo-characters, each with 1 , in exchange for 2 resources is quite good.

Here's a table that shows the cumulative effects of drawing all 3 copies of Elwing's Flight and either playing or discarding them:

As you can see, there are several paths you can take using Elwing's Flight: you can maximize efficiency (benefits relative to costs) by only playing 1 of the copies, maximize effectiveness (total benefit) by playing all 3, or go for a middle ground by only playing 2. There is no hard and fast rule regarding which path you should choose, it's highly dependent on how your game goes.

The choice you make has weight because the results of it have a material effect on the game. Or, to put it bluntly, Elwing's Flight does something noticeable. Readying a questing character and boosting their is surprisingly powerful, as Strider showed later in the cycle, allowing you not just to have your questing characters ready for the combat phase but also to commit someone you otherwise wouldn't due to not being able to use them during the later phases of the round. This can make the boost Elwing's Flight provides much larger than the +1 printed on the card. For instance, you can quest with Argalad and ready him when you would have previously held him back from the quest, effectively making Elwing's Flight +3 . Even if that's the only ready it provides due to it being the first copy, that is still quite potent. Late game, this can get absurd, spending 2 for effectively +9 by readying 3 characters with 2 who you otherwise wouldn't quest with, like Gimli, Mablung, and Beravor.

Elwing's Flight is a complex card, and not for every deck. It's expensive and requires some investment in order to reach its maximum potential, including the thought to decide what that maximum potential will look like this game. Put that effort into it, though, and you'll find Elwing's Flight come to you like Elwing came to Earendil, lighting the darkness of the staging area's with a light brighter than a diamond.