Action: Exhaust Argalad to choose an enemy in the staging area. Until the end of the phase, that enemy gets -X , where X is Argalad's . If this effect reduces the enemy's to 0, deal 1 damage to it. (Limit once per round.) 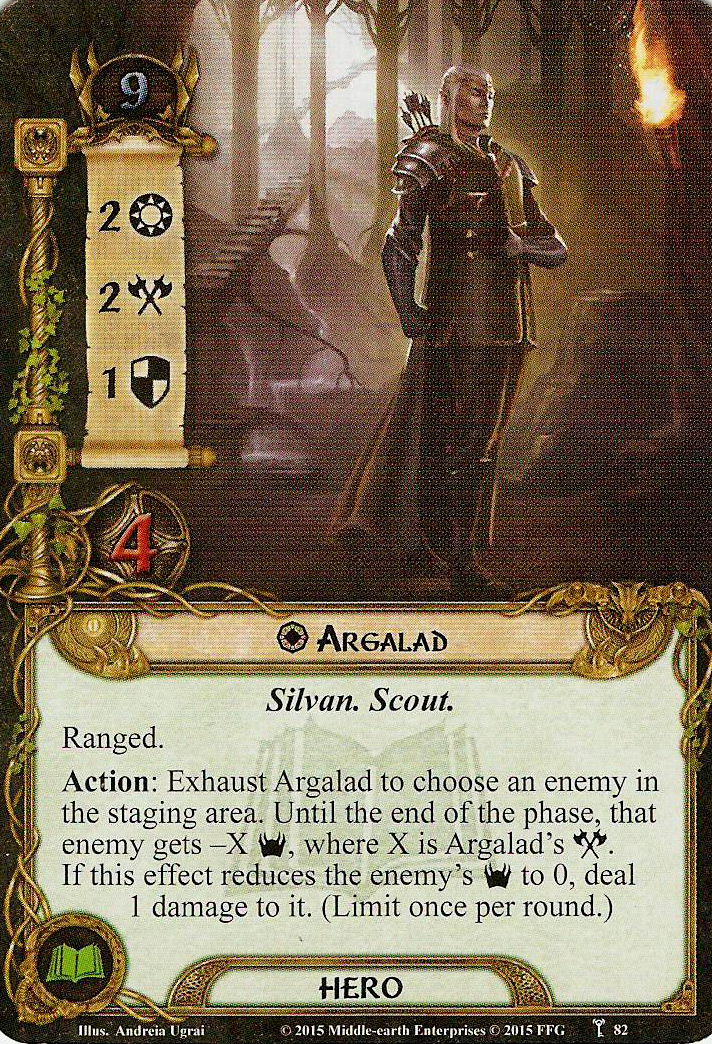 A while ago, Fantasy Flight had a Design Journal on their website, describing the two main kinds of cards they designed; the hit and the haymaker. The haymaker is an explosive, incredibly powerful but expensive effect, like Hour of Wrath or the Boromir bomb. The hit, on the other hand, is a more miniscule effect that is cheaper but needs time and most likely additional assistance to really help the players. Argalad definitely falls into this latter category.

First off, his stats: Argalad has a threat cost slightly lower than the average for heroes (9 vs. 9.26), while his is around the average (2 vs. 1.91) and his is slightly above average (2 vs. 1.91). His 1 clearly leaves him unsuited for defensive work, except in great need, though his 4 makes him able to eat some weak undefended attacks or direct damage from the quest.

So, Argalad should work best either for attacking or questing: the fact that he has Ranged pushes one more towards combat, but his ability makes him more useful for questing.

What of his ability, by the way? While lowering the of an enemy by 2, or more if you can pump up Argalad's , doesn't sound too impressive, and 1 point of damage sounds even less so, Argalad is a clear case of the power of 'hit' cards. Argalad's semi-low threat makes it easier to avoid enemies, and 's engagement trickery (Ranger Spikes, Take No Notice, Noiseless Movement, etc.) makes it even easier to trap enemies in the staging area, leaving you free to whittle them down with Argalad, who, conveniently, helps solve the main problem of leaving enemies in the staging area; having to deal with their .

Now, I am not saying that Argalad is a magic bullet; it takes time to destroy an enemy this way, point by point, and, more often than not, I merely use Argalad's ability to deal 1 damage to an enemy who then proceeds to engage my other deck, whose threat I am not so paranoid about keeping below engagement costs. But even then, Argalad is still handy, helping at least somewhat ease combat for the other deck.

Overall, Argalad does not provide the 'in-your-face' power of Éowyn or Boromir, but that is not to call him weak; he is definitely a 'hit' card, but a very good one, one who, like the Hobbits in Tolkien's work, is not impressive to look at but, in time of great doom, may deliver a stroke of great power, awesome even to the Wise, or may simply do what he can to till and clean the earth for those who come after him.

AlasForCeleborn 509
completely agree. not a BOOM kind of hero, but extremely solid in a trap deck with Haldir, or even in concert with Thalin. throw some attachments on Argalad and you're cancelling some serious threat. I love this hero. great review! — druthers 38 3/1/19